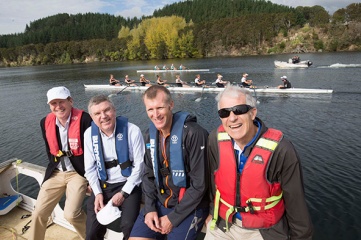 The possibility of hosting the Olympic Games is now open to a wider range of countries, president Bach said in New Zealand

On his first visit to New Zealand on Tuesday, president Thomas Bach said the IOC is ready to look into a wider range of potential host nations – including New Zealand.

“You cannot restrict the right to host the Olympics to just 20 countries”, he said at a press conference.

“The Olympic Games are universal and we should open doors and windows. If New Zealand is ready to look into it, we are ready.”

He also said the changes brought about by Olympic Agenda 2020 encouraged countries to think about how the Olympic Games could fit into the social, economic, environmental and sporting needs of a country.

Bach was visiting to open the new National Olympic Committee headquarters in Auckland, where he was welcomed with a traditional “powhiri” welcome ceremony.

“Like the Olympic Movement, the welcome ceremony signifies peace, friendship and equality, and it shows how New Zealanders embrace the same values we do of tolerance and understanding through sport”, he said.

He was greeted by IOC Members Barry Maister – who is also tourism director at Destination Marlborough, and Barbara Kendall, who is also vice president of the International Surfing Association.

He also met with Minister for Sport and Health, Dr Jonathan Coleman, as well as members of the National Olympic Committee and national sports federations.

On Wednesday, Bach visited athletes at the Rowing New Zealand High Performance Centre in Cambridge, and after a visit to the local school he went on to the Avantidrome home of New Zealand Cycling, where he met a number of New Zealand Olympic medallists and hopefuls for next year's Games in Rio de Janeiro.

President Bach discussed discussed Rio 2016, changes to the sports programme and the Olympic Agenda 2020 reforms with a group of 20 New Zealand athletes at the Avantidrome.