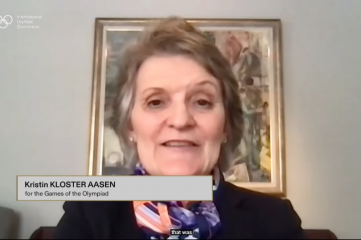 • This doesn’t mean a host has been elected now

• If targeted dialogue is unsuccessful, “continuous dialogue” with Brisbane and other interested parties could resume

The IOC progressed Brisbane to the “targeted dialogue” stage of candidature for the 2032 Olympic Games following “expert advice” to “seize solid existing opportunities and secure the future” – but planning even further ahead is not recommended by IOC Members addressing the 137th IOC Session.

, Chair of the Future Hosts Commission for the Summer Games addressed the question of whether to consider a double award for 2032 and 2036, akin to the dual awarding of Paris and Los Angeles.

“The 2024 and 2028 double award was a very different situation for many reasons, not least because it was an election 11 years ahead, while 2036 would represent 15 years before the Games,” she said.

“In addition the Olympic Games will evolve tremendously during this period. The Games are a reflection of society and there is going to be an evolution in national and individual priorities on sustainability, human development and other topics.

“The UN Sustainable Development Goals are expected to be concluded by the early 2030s and there will certainly be new, more ambitious objectives with which the Olympic movement will want to align.

“The Games should also reflect the fast-evolving sports landscape. In addition there can also be many changes to the political landscape over such a long period, which adds to the uncertainty.”

“It is great to have a long perspective of our host cities and regions,” he said. “With 2032 Brisbane and Queensland we have a long-term strategy about our hosts of our [Summer Olympic] Games after Tokyo, Paris, Los Angeles and hopefully Brisbane Australia," he said.

“But it is also our responsibility, and from the perspective of good governance and fairness, not to go too far in the future, because there may be some other interested parties and cities and regions.

“We have a good choice if we do it for 2032, but in the mind of good governance and fairness for all – maybe all other interested cities and regions – we have not to go too far in the future.”

The IOC elected in January 2019 to take a new dialogue-based approach to selecting Olympic hosts.

“The non-committal and confidential nature of the approach, with no financial commitment, benefits both interested parties and the IOC,” said Kloster Aasen.

“It has encouraged interested parties to come to the table to test ideas and concepts and explore a vision or a potential for hosting future games or ask for information.”

The process begins with a phase known as “continuous dialogue”.

“Since there is no submission required in continuous dialogue, as opposed to the past, interested parties spend very little money and benefit from up to date information and expertise from the IOC at no cost to them. They can test plans and assumptions without public debate and see how to best align their Olympic planning with their own development plans for their communities.

“This flexibility also benefits the Olympic movement to have a long-term strategic outlook across editions of the Games.”

Through the new procedure, a candidate’s hosting plan is moved from continuous dialogue to targeted dialogue when it meets certain criteria, as has now happened with Brisbane.

“It became clear that one project, and only one project met all the opportunities we have seen in the public feasibility assessment, and that project was Brisbane.

“Moving to a targeted dialogue means that we are moving a project to a second stage for a detailed development and assessment.... [it] does not mean that we are electing an Olympic host now.

“Once a preferred host has been selected for a particular edition of the games, no other interested party can enter into targeted dialogue for the same Games, unless the first targeted dialogue has been unsuccessfully concluded.”

Brisbane will now develop its plans in more detail.

“If Brisbane delivers, the Executive Board would be in a position to put Brisbane 2032 forward to the Session to a vote. If not, despite best efforts by both parties, the IOC and Brisbane, the Executive Board could advise the Future Host Commission to go back to continuous dialogue with Brisbane and other interested parties.”

The impact of Covid 19 has been felt by National Olympic Committees and interested parties in continuous dialogue. “Many projects were put on hold while governments were concentrating on protecting the health of their cities and trying to shore up their economies,” Kloster Aasen said.

And the impact will be felt for years to come. “Once the health crisis is over, it is going to have global economic repercussions. The world economy is going through an unprecedented crisis. The current health crisis will have wider global consequences especially with respect to the labour market and the risk of increased inequality.

“While the impact of the crisis can be witnessed now, experts forecast that the world economy is likely to be most impacted over the next 5 years, during the period when we would have expected to elect a host for 2032 under the previous candidature system.

“The expert advice that we have been given is that we should seize solid existing opportunities and secure the future for a next generation of athletes who are facing an uncertain future.”