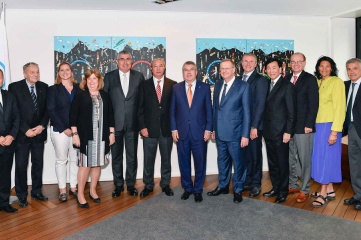 The IOC Executive Board met in Lausanne (Photo: IOC/CHRISTOPHE MORATAL)

The IOC Executive Board on 9 June put forward a proposal to award the 2024 and 2028 Olympic Games to Los Angeles and Paris simultaneously and address challenges around the bidding process for future Games.

The dual awarding proposal will be put to IOC Members at a new Extraordinary Session in Lausanne on 11 and 12 July, when a “Candidate City Briefing” had already been scheduled.

IOC Members had been scheduled to choose between Los Angeles and Paris as the host city of the 2024 Games at the IOC Session in Lima on 13-17 September. With this public statement from the Executive Board, IOC Members are now set to approve in July the proposal to award the Games to both candidates and seize what President Thomas Bach described as a “golden opportunity” and engage in a process of “discussions and negotiation” with the cities to establish when, and not if, they will host the Games.

The IOC’s four Vice Presidents – John Coates, Uğur Erdener, Juan Antonio Samaranch and Yu Zaiqing – have been leading on internal discussions around this possibility in recent months. During SportAccord Convention in April, Samaranch told a small group of media including Host City “Internally we are thinking of how we can be more flexible to have a selection system that better suits our interests and the interests of the Olympic movement.”

Throughout the bid process Paris has said it would not wait until 2028 while Los Angeles has taken a more flexible stance. LA 2024 Candidature Committee Chairman Casey Wasserman said in a statement earlier in the week “LA 2024 has never been only about LA or 2024. Even when the issue of a dual award for the 2024 and 2028 Games was initially raised, we didn’t say it’s ‘LA first’ or it’s ‘now or never’ for LA: that sounds like an ultimatum.”

Wasserman and Los Angeles Mayor Eric Garcetti issued the following joint statement on Twitter: “We welcome the IOC Executive Board’s decision to recognise two excellent bids from two of the world’s greatest cities. With no new permanent venues to build and unwavering public support, Los Angeles is an eternal Olympic city an ideal partner for the IOC.

“We look forward to sharing our unique story with the IOC membership in July and working together to offer the best path forward for our city the Olympic Movement’s future.”

Speaking at the press conference on 9 June, Bach said: “The situation of these candidature for 2024, having two such great cities and such great countries, having two candidatures which are really enthusiastic and really promoting the Olympic Games and Olympic Spirit in a great way – this represents a golden opportunity for the Olympic Games and the IOC.”

“Both cities have really embraced Olympic Agenda 2020 in different ways but particularly in the way they are planning to use a record number of existing and temporary facilities. This is something we have not seen in this dimension before in the Olympic Games and this will lead to significant cost reductions in the organisation of the Olympic Games and will make the Games more sustainable and more feasible.”

“First of all, it is the IOC Members who have to express themselves on this proposal and only after the Members have had this opportunity will we enter in to deeper discussions with the Candidate Cities. Conversations so far have been very open. No one has closed the door. Discussions and negotiation may start, but only after Members have given the green light to this.

“The signal we are sending is very clear – a golden opportunity and a fascinating race. It is hard to imagine something better. It is also a strong signal of stability for the Olympic Movement and the Olympic Games. It is an expression of mutual confidence. It is also offering a great potential for the two cities to cooperate. Transfer of knowledge could even start from day one – there could also be the joint development of some turnkey solutions.  There is a great potential in such a double allocation.”

The Executive Board also agreed on the direction of changes to the bidding procedure for future Olympic Games, including the 2026 Winter Olympic Games, which Stockholm pulled out of bidding for in April.

“There are two reasons why the Executive Board thinks a change is necessary: one external, one internal,” Bach said at the press conference.

“Firstly, the change in the decision-making procedure in many western countries. Today if the establishment is united behind one project, people now say there must be something wrong. We could complain about this change in attitude but we cannot ignore it. Even less so, because we are giving some arguments for this scepticism.

“To put it in a nutshell, the candidature procedure in this world we are living in has become too expensive and too onerous for potential candidate cities and in this way it is producing too many losers. The IOC will customize its approach to the needs of the cities in order to develop together the best value proposition for the cities and for the Games.  All this will lead to a lighter process for the cities with reduced costs.”

IOC Members will discuss the new approaches at the Extraordinary Session in July.