Home
»
News
»
How to be a European Capital of Culture 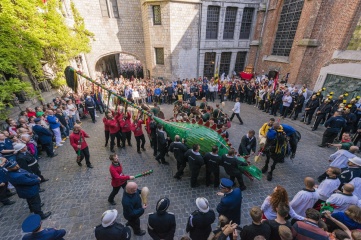 The Belgian town of Mons is a 2015 European Capital of Culture. The Ducasse de Mons celebrations are recognised as one of the UNESCO Masterpieces of the Oral and Intangible Heritage of Humanity (Photo: Anibal Trejo / Shutterstock)

The European Capitals of Culture programme has grown immeasurably since its launch in 1985.

“We started modestly 30 years ago and now we are typically having cities spend up to EUR 70-100m for a yearly programme being a European Capital of Culture,” says Karel Bartak, Head of the Creative Europe Coordination Unit at DG Education and Culture, European Commission.

“So it is very prestigious from the point of view that there is a huge interest in every country.”

Initiated by Greek culture minister Melina Mercouri and originally called “European City of Culture”, the programme was renamed “European Capitals of Culture” in 1999. Two hosts are now appointed each year, enabling a wider range of destinations to benefit.

“In the past most of the bidding and winning cities were capital or very big cities, but now many of these have already been European Capitals of Culture, so now we are seeing smaller cities bidding and it brings a new and very interesting edge”.

“If you have a smaller place of 100-200,000 inhabitants, the impact is much, much bigger and also much more visible for the city's inhabitants than if you have a European Capital of Culture in say Paris or Athens.”

In 2013 the medium-sized Slovakian city of Kosice was a European Capital of Culture.

“Everyone who comes from there says the city has been changed beyond recognition by the year, and it has really become a cultural hub including Ukraine, Hungary, Poland and so on,” says Bartak.

“In Umea last year in Sweden it was similar case; and this year the town of Mons in Belgium, which has only 80,000 inhabitants, is having a huge impact and the whole country is celebrating.”

Mons is joined by Pilsen in the Czech Republic as a European Capital of Culture for 2015.

The bidding procedure is based on a “Decision” of the European Parliament and the Council of the European Union, which is the legal basis for the selection and monitoring processes.

The country concerned typically issues a call for applications six years in advance of the title year. Interested candidates submit a bid book of 80-100 pages and present it to a panel that pre-selects a shortlist of candidates.

The pre-selected candidates then have another seven to eight months to prepare the final bid.

The panel is now composed of 10 members who are selected by European Commission, Parliament, Council and Committee of the Regions, plus two selected by the governments of bidding country. This international jury of experts is renewed by a third every year.

The process is democratic. “The chairperson, who is always chosen by the jury from among its members, is always trying to have a consensus. But if there is no consensus then there is a vote,” says Bartak.

“It is always tense as the responsibility is huge, cities investing a lot of energy, hope and financial resources in their bid.”

Once selected, the host cities have four years to prepare their programme for the year. During this phase, the Commission convenes monitoring meetings during which the panel give cities advice and guidance and take stock of their preparations.

How are the bids evaluated?

The international jury judges the bid on criteria specified in the Decision of the European Union.

One of these criteria is the European dimension of the programme: how it brings to the fore the cultural diversity in Europe and our common cultural features, how it leads to new or reinforced cultural partnerships and cooperation at EU level. Another is the participation of the citizens and of the various cultural, social and economic stakeholders of the city in the design and implementation of the yearly programme. The jury also looks at sustainability and legacy issues as the project must be embedded into the longer term cultural development strategy of the city.

“Besides that, the jury is looking into the financial sustainability – the composition of the package of money that is available. We are always keen on having a good mix between private and public funding and so on.”

The financial contribution of the European Commission is relatively small.

“The Melina Mercouri prize which is given to each city which has won the title is 1.5m Euros, so it is just a kind of symbolic contribution; otherwise the city has to find the budget. Many hosting cities however use the money coming from the EU Structural Funds.”

The selection process for 2020 European Capitals of Culture is now underway. Ireland and Croatia are currently running their competitions for 2020 and the bidding process is set to change slightly.

“The current situation is that the Commission is monitoring the process, but is not at all interfering in it. This is run by the independent panel, the jury. Until now, the national governments and then the institutions of the EU (European Parliament, Commission and Council) would then take on board the recommendation of the jury,” says Bartak.

“As of the 2020 titles, this will be done differently; the jury will recommend the city to the government concerned, so the institutions of the European Union will be left out of the process – to make it simpler and less bureaucratic.”

The pre-selection process in Croatia was completed in May 2015. “We had nine cities competing and four were preselected. The recommendation for the final selection will happen in January of next year.”

By October, it will be clear which cities in Ireland are competing to host the 2020 European Capital of Culture. “I think all bidding cities have a chance. Each application is judged on its merits,” says Bartak.

Creating a network of cities

There is a great opportunity for the European Commission and its network of European Capitals of Culture to share experiences.

“As previous title-holders, Mons and Pilsen have organised a gathering of previous and future European Capitals of Culture, which was an interesting moment of brainstorming and bringing together their experiences and stories of preparation and implementation.

“We feel that with our thirty years of experience, we have more and more knowledge and advice to give and, with the lessons learned it becomes easier for cities to avoid mistakes made in the past.”

The European Commission will discuss these issues and opportunities in greater detail at HOST CITY 2015 on 9th and 10th November in Glasgow.

To find out more about the bidding process for European Capital of Culture visit http://ec.europa.eu/programmes/creative-europe/actions/documents/ecoc-candidates-guide_en.pdf or register to attend HOST CITY 2015