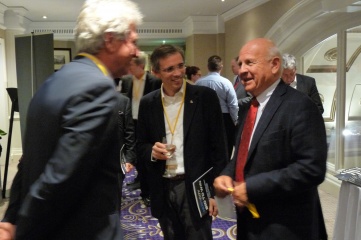 The unanimous adoption of Olympic Agenda 2020 reforms may have had a galvanising effect internally on the IOC, but influential figures close to the IOC say the project has created high expectations that may prove difficult to fulfil in good time.

“I am very impressed. It’s a true sign of strength, both for the president and for the capability of change,” Sweden’s National Olympic Committee president Stefan Lindeberg said in an exclusive interview with HOST CITY. “But it’s also creating huge expectation for true change.”

The president of Slovenia’s National Olympic Committee and vice president of the International Skiing Federation, Janez Kocijančič was at the IOC session on Monday when Agenda 2020 was adopted.

“The main idea, under the very robust pressure of the president, Dr Thomas Bach, was to start the changes. The process of reform is open and I hope it will continue,” he said, speaking to HOST CITY exclusively.

But he also warned that implementing all 40 recommendations of Agenda 2020 will not be easy. “If somebody is too ambitious, it might be that the reforms stop before they really get started.

“I hope it will go further and I believe in the courage of the president and certain people around him that they will continue like that. But there is a lot of work that needs to be done.”

Kocijančič and Lindeberg both made valuable contributions as speakers at HOST CITY Bid to Win conference in London in October, where Agenda 2020 proposals were debated in great detail.

Lindeberg was the leader of Sweden’s bid to host the 2022 Olympic Games, which was abandoned due to a lack of political support for the project as the infrastructure costs for hosting Sochi 2014 were perceived to be spiralling out of control.

“The fear among politicians was so massive of taking this perceived risk,” he told HOST CITY.

An important goal of Agenda 2020 is to reduce the cost of hosting the Games and guarantee the sustainability of Games infrastructure – but this will take a decade to achieve, Lindeberg said.

“This is a really tough situation to face for the IOC, because it’s not until 2024 that we can see the full implementation of the new decisions regarding the buildings for the Games.

“They will do what they can to make as much change as possible for 2022 and even for the host city contracts for 2018. Expectations will be very high, so it’s really tough.”

Even aspects of Agenda 2020 that do not relate to physical infrastructure will take time to implement, Lindeberg warned.

“It’s been very positive when you look at the values parts of the Agenda 2020, with inclusion of sexual non-discrimination and workers’ rights. But we need to see results coming up quick so these values will be really shown in upcoming Games, and that’s the tough part.

“Now that the Host City contract is being made public, it’s very important the IOC carry these changes into the contract for 2022. Because if they don’t they will have a problem with credibility.

Neither Lindeberg nor Kocijančič were eligible to vote on Agenda 2020 but both stated their full support for the reforms.

“I would have voted for the recommendations, because I believe every process of reform has to be started,” Kocijančič told HOST CITY. “Agenda 2020 is a very positive approach because it means the very beginning of reforms. For the time being, I am satisfied with developments.”

HOST CITY contacted the IOC press office for a response to these reactions and a press release was promptly issued, in which president Thomas Bach said: “Following the success of the IOC Session in Monaco and the unanimous endorsement of my fellow IOC members for the Olympic Agenda 2020 recommendations, it is critical that we utilise the momentum and energy we have created throughout the Olympic Movement and start implementing straight away.”