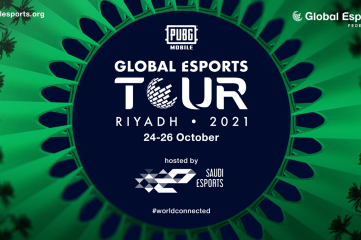 The Global Esports Tour heads to Riyadh, hot on the heels of the first event held in Los Angeles last month. Convened by the Global Esports Federation and hosted by the Saudi Esports Federation, as live audiences return to events across the world. The GET Riyadh goes live from Sunday 24 – Tuesday, 26 October 2021 and will be battled out on PUBG MOBILE, one of the world’s most popular esports titles with over 1 billion total downloads worldwide.

The GET Riyadh will see 16 of the finest PUBG MOBILE pro-teams compete for a prize pool of US$150,000. High profile teams competing in Riyadh include Russia-based Virtus.pro, Saudi’s Rico Infinity Esports, Nepal’s DRS Gaming (Da Real Soldiers) and T2K, Morocco’s Cryptics, and Jordan’s FATE Esports, in a truly global line-up.

“The Global Esports Tour underscores the true energy of our #worldconnected motto. From LA – one of the global centers for entertainment, we head to the Middle East – one of the fastest-growing esports regions on the planet, Saudi Arabia. We are proud to join our host and GEF Board Member HRH Prince Faisal bin Bandar bin Sultan Al Saud, and we look forward to connecting with players and fans in Riyadh,” said Paul J. Foster, CEO of the GEF.

“Riyadh is pleased to host the Global Esports Tour, which will be a prominent part of our annual calendar of esports events. The Global Esports Federation has been a valuable partner to us, and we are delighted to bring this event to our nation's capital, Riyadh. Esports continues to flourish around the world, and we are excited about the opportunity to host and organize tournaments that connect, excite, and engage the community," said HRH Prince Faisal bin Bandar bin Sultan, President of the Saudi Esports Federation.

Joining the pro-team line-up and providing their expert commentary and analysis at the GET Riyadh will be British esports commentator and analyst, Jake “Highland Wolf” Hannett; as well as esports caster, analyst and coach, Joshua “Professor Tarzan” Chan. They will be joined by Arabic casters and gaming video creators Abdulaziz “Henky” Almuhanna and Tariq “K0de” Khtatneh.