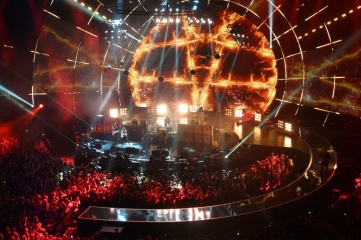 Less than a year after the success of the EMAs, Glasgow is hosting MTV Live Lockdown on 30 September

MTV is returning to Glasgow to stage MTV Live Lockdown on 30th September – the second MTV live music event to be produced in the city in less than a year.

The news builds on the success of Glasgow’s hosting of the MTV European Music Awards (EMAs) in November 2014 and the MTV Crashes in 2010.

MTV Live Lockdown is an eight-part series in which a selection of high profile artists travel underground and emerge for a special showcase performance in front of a live audience.

MTV UK is partnering with Glasgow City Marketing Bureau (GCMB) and EventScotland to deliver the event, which will be produced by JJ Stereo and filmed and broadcast as a 3 x 30-minute series set to air on 30th October on MTV Music and MV Live HD.

The acts will perform in a coliseum style set, providing a 360 degree view for an intimate and exclusive audience of approximately 500 fans.

Paul Bush, Director of Events at VisitScotland:  “It’s fantastic to welcome MTV to Scotland once more and hold the first production of MTV Live Lockdown outside of London.  MTV Live Lockdown forms part of a legacy from the 2014 MTV EMA which was also hosted here; further reinforcing Scotland’s reputation as the perfect stage for events”.

Paul Bush is speaking at HOST CITY 2015 in Glasgow, the leading EU-based meeting of cities and sports, business and cultural events, on 9 to 10 November.