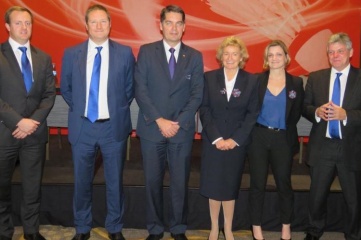 In bidding for the Sudirman Cup, Glasgow has found itself being awarded the hosting rights to the Badminton World Federation’s flagship Championships event in 2017

The BWF took the decision to take its most prestigious event to Glasgow after seeing the city’s bid for the 2017 Sudirman Cup. The BWF awarded the Sudirman Cup to the Gold Coast, but was so impressed with Glasgow’s bid that it took the opportunity to present the Scottish city with the hosting rights to the World Championships.

“It was obvious how much work and thought was invested in the bid which Badminton Scotland and Glasgow submitted,” said Poul-Erik Høyer, president of the Badminton World Federation (BWF).

“I am pleased to say they were extremely enthusiastic about this prospect and therefore we are able to leave Lima happy to have secured two excellent hosts for top BWF tournaments. It’s truly a win-win situation for everyone and most importantly, for badminton.”

Glasgow’s bid was a partnership between BADMINTONscotland, Glasgow Life and EventScotland.

Anne Smillie, Chief Executive of BADMINTONscotland, said "The return of the World Championships to Scotland is a major coup for BADMINTONscotland and our partners, Glasgow City Council and EventScotland.

“We had put together a superb bid for the Sudirman Cup and our presentation was extremely well received, even though we narrowly lost out to Australia. There is little doubt that the quality of our bid played a significant part in the decision to award these Championships to us.

“Securing this event will also provide a huge incentive for our fantastic volunteer team, many of whom were involved in this summer's Commonwealth Games and will be on duty again next week at the Emirates Arena for the Scottish Open Grand Prix."

The most prestigious tournament in badminton, the World Championships is the latest major event to be secured for Scotland as a legacy of the 2014 Commonwealth Games and will provide a major platform for the ongoing development of the sport in the coming years.

Councillor Gordon Matheson, Leader of Glasgow City Council, said: “This is fantastic news for Glasgow. Hosting the World Individual Badminton Championships is a brilliant opportunity to reaffirm our position as one of the top sporting cities in the world. It also provides the perfect platform to build on the success of what has been an outstanding summer of sport for Glasgow following the best ever Commonwealth Games.

“Alongside its ever growing portfolio of major events and its world-class sporting facilities, such as the Emirates Arena, Glasgow also offers a wide range of fantastic hotels and restaurants to suit the needs of the visiting players and the many fans who will inevitably follow. We can’t wait to welcome them to our friendly city during the summer of 2017.”

The 2017 Badminton World Championships will take place in the Emirate’s Arena, which is hosting the Scottish Open Grand Prix this week.

The 2014 Badminton World Championships were staged in Copenhagen. The 2015 event will be held in Jakarta.