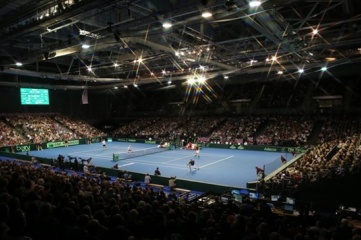 The Great Britain vs. Australia semi-final of the Davis Cup will take place in Glasgow’s Emirates Arena on 18-20 September

Glasgow’s Emirates Arena is to host the Davis Cup by BNP Paribas World Group semifinal between Great Britain and Australia on 18 – 20 September, the Lawn Tennis Association announced on Tuesday.

“We are delighted that Glasgow has been selected to host the Aegon GB Davis Cup Team once again for the semi-final against Australia in September,” said Paul Bush OBE, VisitScotland’s Director of Events.

“Scotland is the perfect stage for events and we are certain that fans from all across the country will turn out in force to show their support at the Emirates Arena.”

Andy Murray, who won both of his singles matches against USA at the Emirates Arena in March, said “It’s exciting for the team to be going back to Glasgow. It’s always special to play in front of a home crowd and we are fortunate to have played our last three ties at home.

“We had a unique atmosphere in Glasgow, the crowd was unbelievable.  It’s going to be a huge week for our team and we’ll be doing everything we can to get GB through to the final."

The indoor arena in Glasgow’s East End was built to host badminton events at the 2014 Commonwealth Games and now hosts basketball on a regular basis. It will have its capacity extended to 8,200 and a hard court laid down for the Davis Cup event.

The Great Britain vs. Australia semi-final coincides with the meeting between Belgium and Argentina at Forest National in Belgium.

The winner of the semi-final in Glasgow will either travel to Belgium or welcome Argentina for the final in November.