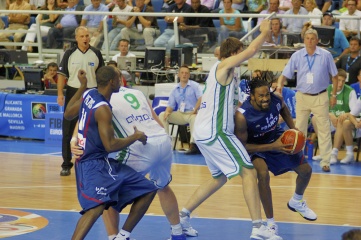 France has been awarded the final phase of EuroBasket 2015 by Fiba Europe, basketball’s governing body in Europe, with the country set to share the hosting rights to the opening exchanges of the national team tournament with Croatia, Germany and Latvia.

The showpiece conclusion to the men’s tournament will be staged at the multi-purpose Lille Arena, which will have a capacity of 27,000 for the EuroBasket.

For the first time, the group phase of the competition will be shared between four countries, with Zagreb (Croatia), Berlin (Germany) and Riga (Latvia) joining Montpellier in France as host cities.

“This is an important moment in the history of European basketball, as we have voted not only for the hosts of next year's event but also on pioneering a new concept, with four hosts,” Fiba Europe president Turgay Demirel said. “All bids were of the highest quality and it was not easy to choose between them. I would like to thank all bidders for their commitment and their excellent preparation work, coming up to the vote.”

A total of 16 national bodies expressed an interest in hosting the tournament, leading to eight formal bids. Finland, Israel, Poland and Turkey were the countries to miss out in the bidding process. Croatia, France and Turkey tabled bids to host one of the four group phase pools and the final phase knock-out round, while Turkey bid to organise the final phase only. All other bids were solely for pool-phase hosting.

France was left as the only candidate to host the final phase after Turkey shelved its bid and Poland and Croatia withdrew their pitches for the showpiece stage before the Fiba Europe board met to finalise hosting arrangements.

EuroBasket 2015 was originally slated to take place in the Ukrainian cities of Kyiv, Donetsk, Lviv, Odessa, Kharkiv and Dnipropetrovsk before the ongoing political unrest in the eastern European country persuaded Fiba Europe into a June re-think. After removing the tournament from Ukraine, Fiba Europe said it would seek to determine whether the country could host the 2017 edition of the biennial event.

EuroBasket 2015 will take place from September 5-20 next year and the tournament will serve as a qualifying competition for the Rio 2016 summer Olympic Games.