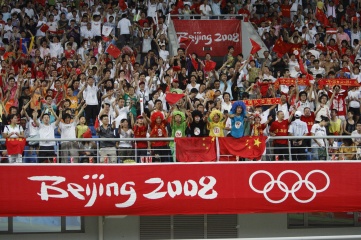 Norman Liu was in the marketing department of Beijing 2008 Olympic Games Organising Committee, which attracted large crowds to football

Regardless of how the national team performs, China hosting the FIFA World Cup would bring commercial and sporting benefits at home and internationally, one sports industry professional told Host City in Beijing

Hosting the FIFA World Cup in China would bring benefits for football internationally and at home, even if the national team still has a long way to go to become strong team, according to Oceans Sports & Entertainment vice president Norman Liu.

“China has a big market in the world, in terms of the population of football fans,” he told Host City in Beijing. “So China could be the right destination for FIFA to promote the football sports worldwide.”

Liu has been in China’s sports industry for years, including working in the marketing department of the Beijing 2008 Olympic Games Organising Committee (BOCOG).

“Also in China we have so many companies that want to get involved in football and sports marketing. So commercially, China could be a great choice for world football.”

China hosted the Women’s World Cup in 1991 and 2007. The country also has experience of hosting the biggest events in the world, from the 2008 Olympic Games in Beijing to the 2014 Youth Olympic Games in Nanjing and the 2010 Asian Games in Guangzhou.

At least 10 cities are required to host World Cup matches, with co-hosting within the scope of the bidding rules.

On 14 May, (South) Korean Football Association president Chung Mong-gyu told national press that he would support a joint bid for the 2030 World Cup with China and Japan. But at the FIFA Congress in Bahrain on 10 and 11 May, a rule was upheld that states continents must wait two editions before hosting the World Cup again. Asia has the 2022 World Cup in Qatar.

So the soonest Asia could bid for the World Cup would be for 2034.

Earlier in the month Liu Xiaoming, China’s Ambassador to the UK, said hosting the World Cup is a “dream” for China beyond 2030.

According to Norman Liu, hosting the FIFA World Cup would also help to develop the sport in China.

“You could not imagine before the Olympic Games so many fans going to the stadium to cheer for the home club. After 2008, people would go to the stadium on match days, on the weekend and on weekdays. So, I think the mega event changed people’s behaviour to consume sports.

“But I think if China hosts the World Cup that could be very good opportunity to be developed further in China.”

Increased participation is another potential benefit and China is working to improve the standard of play in the country. The Chinese Football Association’s recently published 2020 action plan includes targets for developing football in China, such as for the men’s team to be in top 70 by 2020 – up from their current FIFA ranking of 81st – and for China to finish in top eight of 2019 Women’s World Cup.

However, the qualification of the national team is not a criteria for hosting.

“Although our national team’s performance still has a big space to improve, the Chinese society have the desire and interest to host a worldwide tournament in China,” said Liu.

“Personally, I think hosting the World Cup will help China to develop football in China. Chinese fans never gave up hopes on their national team performing more and more in international tournaments and we hope our national team can be better than before, to be a qualified host.”

In the meantime, there is still a possibility China can qualify for Russia 2018. “It’s a small chance.”