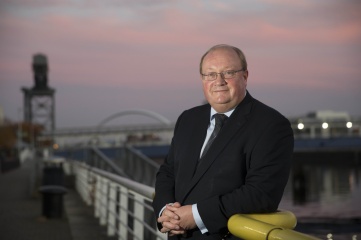 Paul Bush OBE, Director of Events, explains how the upcoming major sporting events continue to build on the legacy of 2014

Next year Glasgow will once again take centre stage and make history when it hosts the inaugural 2018 European Championships in partnership with Berlin.

The opportunity to host this exciting multi-sport event for the first time is a direct legacy of Scotland hosting the XX Commonwealth Games and The 2014 Ryder Cup.

The facilities and expertise gained from both of these events, along with the events Scotland has hosted since, will now play a crucial role in the successful delivery of next year’s event.  Six of the seven sports - Aquatics, Cycling, Golf, Gymnastics, Rowing, and Triathlon – will be in Glasgow and Scotland while Berlin will host the Athletics.

The Sir Chris Hoy Velodrome at Emirates Arena, The SSE Hydro, Tollcross International Swimming Centre and Cathkin Braes Mountain Bike Trails are just some of the venues to make a return, while a new World Championship and Olympic standard BMX track will be built in the city, providing future opportunities for major events as well as grassroots development for the sport. A few of the sports will head out of city. Edinburgh’s Royal Commonwealth Pool will host the Diving and the Open Water Swim will take place at the picturesque Loch Lomond, while Rowing and Triathlon will take place in Strathclyde Country Park.

For spectators and athletes alike, the Glasgow 2018 European Championships will create a new highlight on the international sporting calendar. It creates the opportunity for us to reach beyond the dedicated fans of the individual sports and to connect to a much broader audience, just as we saw through the legacy of the XX Commonwealth Games. It is a chance for sports to use Glasgow 2018 as a shop window to connect with people beyond the event and with some of our biggest participation sports taking part, it again allows us to inspire more people to take part in sport, get involved in coaching and establish more teams and places within sports clubs.

The success of and the legacies from the XX Commonwealth Games and The 2014 Ryder Cup have been the catalysts for Scotland’s winning bids to stage internationally significant events in recent times. They set the bar by which Scottish events are judged. Glasgow 2018 will build on this and help create a legacy going into the two major events taking place in 2019.

As the sporting capital of Scotland, Glasgow will again play host to some of the world’s best athletes’ as it hosts the 2019 European Athletics Indoor Championships, while at Gleneagles – which will also host the golf event for Glasgow 2018 -  the magic of The 2014 Ryder Cup will be recreated when it welcomes the women’s equivalent, The 2019 Solheim Cup.

Just like the XX Commonwealth Games and The 2014 Ryder Cup, the images from the 2018 Glasgow European Championships will define Scotland and it is the far-reaching legacies of these occasions that will continue to define Scotland’s event industry.

At EventScotland we are proud of our role in bringing the legacy to life by identifying, developing and utilising Scotland’s unique selling points to bring the world’s best events to our shores.