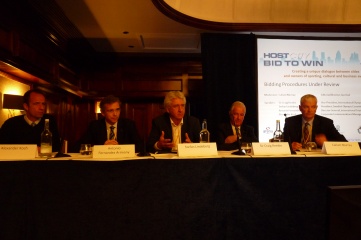 The inaugural Host City: Bid to Win conference has provided a thought-provoking and timely debate on bidding procedures for major events.

The conference examined engaging themes central to the debate including the IOC’s proposed Agenda 2020 reforms and emerging trends in the bidding for and hosting of large-scale, multi-sport and cultural events.

Speaking at the one-day conference at the St James’ Court, A Taj Hotel in London, IOC Vice-President, Sir Craig Reedie, said the IOC is determined to change its approach in response to the current bidding climate around major events.

“The evidence of the 2022 winter bids shows us that this is necessary. The IOC is right to look at its processes and try and correct the current situation. It wants to adopt a partnership approach and start a dialogue with bid cities.

Reedie also called for the communications gap to be plugged between the IOC and Host Cities.

“Sochi was certainly not encouraged by the IOC to make the scale of investment that they did. It was for the future of the city not the two weeks the games were hosted.”

Lindeberg, said: “The public has to understand the costs and the risks. The process needs to be transparent and this needs to be communicated much earlier in the bidding process.

“We want much more cooperation from the IOC. We want a situation where we start with a discussion about our city, our legacy, what we want from the Games then work with the IOC to create a host city contract that we understand not something that is imposed on us.”

On declining to bid for 2022 Winter Games, Lindeberg said: “If we could do it again our answer would be yes. At the time we needed a much clearer statement from the IOC about exactly what it means to bid. If we had had the discussion we are having now in January, our answer would have been yes.”

“We need to be asking the countries why they are bidding. In the media it is quite often reduced to the economic value but if you ask this question to each country you will get vastly different answers. If we take Germany, for example, they had a very clear vision for why they wanted to host the 2006 World Cup – to present a unified Germany to the world. The decision to host has to make sense for that country. That is why 2018 went to Russia and 2022 went to Qatar because their bids made the most sense for their countries.”

In a later panel which looked at evaluating bidding and hosting around the world Mario Andrada, Executive Director of Communications for Rio 2016, said:

“The venues will be ready on time; we are 100% confident of that. Our focus will be on transport, accommodation and getting the people ready so they have confidence in the legacy for Rio.

“We will, of course, learn lessons from London 2012 but Rio 2016 will be a different Games, it will have a Brazilian soul. We have to show it is good for the city, good for the country and good for the population. We want to focus on the self-esteem of our people and to deliver an intelligent and efficient Games with a clear and tangible legacy.”

“The argument has not been as made cogently as it could be, bidding just accelerates the investment which is necessary anyway, be it airports, rapid transport or other city infrastructure.  The benefit of the legacy is not being articulated as strongly as it could be by cities.

“Communicating the legacy of hosting these events, the intangible side of it, is critical to engaging the public. In order to achieve success you have to articulate clearly the benefits of staging an Olympics, a World Cup or a Grand Prix.”

Host City: Bid to Win brought together experts and decision makers to explore the challenges and benefits of bidding for major global events. At a time when the bidding process for events is under the spotlight Host City: Bid to Win has engaged expert insight into the heart of the debate including the IOC’s proposed Agenda 2020 reforms and emerging trends in the bidding for and hosting of large-scale, multi-sport and cultural events.