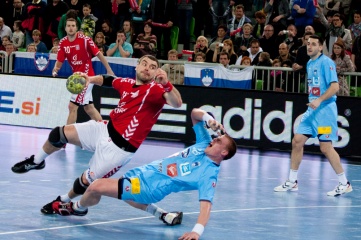 The EHF has elected hosts for its European Championships

The European Handball Federation (EHF) has awarded the hosting rights to its 2018 and 2020 men’s and women’s European Championships, with the men’s Euro 2020 tournament set to expand to 24 teams for the first time.

The EHF Congress in Dublin, Ireland decreed that Croatia will host the 2018 men’s event, while France will stage the 2018 women’s tournament.

The women’s Euro 2020 will head to Denmark and Norway, but it is the men’s event in the same year that will undergo a major hosting revamp.

The EHF last month revealed details of Sweden, Austria and Norway’s proposal to co-host the 2020 European Championships, with the organisation stating that its flagship men’s national team event was “likely” to be the first involving 24 teams and held in three countries.

In February, the EHF Executive agreed to submit a motion to the EHF Congress in Dublin for an expansion of the men’s European Championships from 16 teams to 24 as of 2022. In considering the changes, the Executive acknowledged that an expansion of the event would result in a need to strengthen the quality of youth national teams throughout Europe.

The federation added that expansion would also open up possibilities for nations to host one or more rounds of the EHF Euro for the first time.

However, the Executive also said that should an agreement be reached at the September 19-20 meeting, these plans could be advanced to the 2020 competition. This goal has now been realised.

Under the co-hosting plan, the three organisers plan to hold the championship in six different cities and venues, with the Euro 2020 final set to be played in front of 24,000 fans in Stockholm's Tele 2 Arena, a multi-purpose stadium with a retractable roof.

The six preliminary round groups shall be played in the Austrian cities of Vienna and Graz, the Norwegian city of Trondheim and the Swedish cities of Malmö and Gothenburg. The main round shall take place in Vienna and either Malmö or Gothenburg before heading to Stockholm for the finale.