Home
»
News
»
Edmonton: we host events for our community 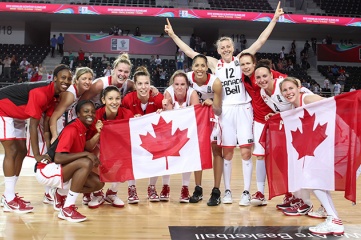 Edmonton, the Canadian city bidding to host the 2022 Commonwealth Games is looking forward to hosting a much smaller event in 2015 – the FIBA Americas Women's Championships, because it fits with its strategy of attracting events that the community is interested in.

“In our event strategy we have identified specific events and activities that make sense for our community. It is gratifying to see the strategy coming to life.”

Basketball has been targeted as a key sport for the city. “What is so satisfying about winning this event is that is part of our larger strategy of further developing Edmonton as a centre of excellence in basketball and the home of basketball in Canada,” she said.

“The Canadian Senior Women's National Basketball Team calls Edmonton home now. We are hoping to attract all the national teams to do the same.”

The reach of the event is boosted by the fact that the tournament will also serve as the qualifiers for the 2016 Olympic Games in Rio de Janeiro.

“Our Canadian women’s national basketball team now has the opportunity to compete for an Olympic berth with a home-court advantage,” said Michele O’Keefe, Executive Director of Canada Basketball. “Hosting is a strategic priority for Canada Basketball and this Championship is a great step forward.”

Choosing the right event for cities to bid for is a key theme of HOST CITY’s Bid to Win conference in London on 28th October, which provides a unique dialogue between rights holders and cities.

Bal Gosal, Minister of State for Sport said “Hosting international sport events such as the FIBA Americas Championship for Women provides an opportunity for our athletes to achieve their podium goals in front of enthusiastic Canadian crowds and gives a great boost to the local economy.”

The Championships take place on 9-16 August 2015 with 10 teams from the Americas zone competing in the eight-day tournament. All 24 games are being played at the Saville Community Sports Centre (SCSC) at the University of Alberta’s South Campus in Edmonton.