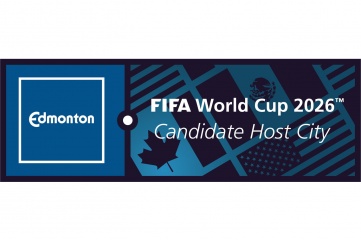 [Source: City of Edmonton] The City of Edmonton has announced a comprehensive and growing level of public support for their candidature to be a host city of the FIFA World Cup 2026™, taking place in Canada, Mexico and the United States.

Collated feedback from surveys conducted in 2018 and 2020 show an increased level of public support for the hosting. Edmonton is one of three Canadian cities included in the United bid, alongside Montreal and Toronto, with the city’s Commonwealth Stadium having a capacity of 56,400 and located just minutes from the city centre.

Among the results, the surveys showed a 77% support among Edmonton residents for the hosting of the FIFA World Cup 2026™, an increase of 6% from 2018, with prime reasons for support being the economic boost (40%), exposure for the city (32%), and benefits for tourism (21%). More than 1,200 residents were randomly recruited for the survey, while an additional open-link survey was completed by more than 3,700 residents, showing an increased level of 93% favourability for the hosting (up from 89% in 2018).

The release of the survey data has provided an extra boost to the city’s aspirations to be confirmed as a host city for the FIFA World Cup 2026™ and serves as a positive reinforcement of its commitment to driving the recovery of sporting events following the COVID-19 pandemic. Throughout the pandemic, Edmonton has played a leading role in North America in continuing to provide a platform for sports events, hosting events such as the NHL Stanley Cup Finals and the IIHF Junior World Championships, and receiving widespread praise for their handling of such occasions in a secure and safe environment.

With FIFA’s final confirmation of host cities expected to be later this year, today Edmonton has launched their website for its 2026 candidature, to provide information about the city’s vision for hosting the World Cup, and to keep followers up to date with news. The website is available to view here.