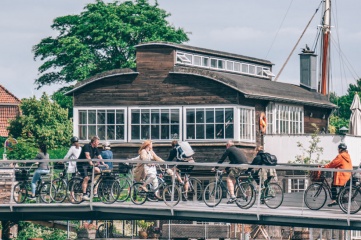 Denmark, Copenhagen, Roskilde, Nyborg, Vejle and Sønderborg join the list of cities and regions that have benefited from hosting the Tour de France Grand Depart

Denmark will host the Grand Départ of the 2021 Tour de France, starting on 2nd July in capital city Copenhagen, followed by a second stage on 3rd July running from Roskilde to Nyborg on the island of Funen, and the third stage on July 4th starting in Vejle and finishing in Sønderborg.

A Deloitte report on the 2017 Grand Départ found that Düsseldorf benefited economically by EUR 64m, with the total marketing value to the host estimated at EUR 443m. Other cities and regions to have benefited from hosting the Grand Départ include Utrecht (2015), Yorkshire (2014), and Rotterdam (2010).

Denmark’s bid to host a Tour de France Grand Départ officially began on June 20th 2016 in Paris, where the bid was presented to Christian Prudhomme by the former Danish Minister for Business and Growth, Troels Lund Poulsen, and the Lord Mayor of Copenhagen, Frank Jensen.

Christian Prudhomme, Tour de France Race Director at the Amaury Sport Organisation (ASO) said: “Of course the Tour de France, with the best professional sports cyclists in the world, had to visit Denmark and Copenhagen – the best country and the best city in the world for everyday cycling. The Grand Départ Copenhague – Danemark 2021 is the ‘rendez-vous’ to celebrate the mutual inspiration between every day cycling and professional cycling.”

With 198 top athletes and more than 900,000 spectators expected to attend the three stages, this will be one of the biggest sports events ever held in Denmark.

The Tour de France is broadcast in 190 countries and has about 3.5 billion TV viewers during the race.

Lars Lundov, CEO of Sport Event Denmark, said: “Denmark made it! It is fantastic! A dream born many years ago has come true. The world’s greatest cycling race starts in Denmark in 2021. It doesn’t get much bigger. It is the perfect match for the proud Danish tradition for hosting major cycling events where the massive interest for cycling and the stars of cycling are the driving forces.”

The hosts of the three stages

The opening stage, a 13-kilometre time trial in central Copenhagen, starts off on H.C. Andersens Boulevard and finishes on City Hall Square after having passed through the heart of Copenhagen including landmarks such as the Royal Palace of Amalienborg, the historic harbour of Nyhavn and the parliament at Christiansborg.

The second stage runs for 190 kilometres, starting in the heart of the historic city of Roskilde and finishing in Nyborg on the island of Funen after crossing the majestic Great Belt Bridge with possible side winds and a chance of breakaway.

The third and final stage starts off in Vejle, passing sights such as UNESCO world heritage Jelling Monuments and riding through 170 kilometres of stunning countryside scenery before finishing in Sønderborg, with an airport five kilometres from the finishing line.

The city of Odense was included in the original bid as the destination of the second stage but was replaced by the municipality of Nyborg, due to a desire from the ASO to let the Great Belt Bridge play a bigger role in the second stage of the Tour.

The bid team consisted of the Ministry of Industry, Business and Financial Affairs, the municipalities of Copenhagen, Roskilde, Nyborg, Vejle and Sønderborg, Sport Event Denmark, Wonderful Copenhagen, the Capital region of Denmark and the regions of Zealand and Southern Denmark.

The event will be organised by a partnership consisting of the Ministry of Industry, Business and Financial Affairs and the municipalities of Copenhagen, Roskilde, Nyborg, Vejle and Sønderborg as stakeholders. The capital region of Denmark and the regions of Zealand and Southern Denmark are contributing to the partnership financially.

An administrative office with responsibility for the day-to-day operation of this partnership will be set up to implement the Grand Départ in Denmark. The temporary director of the administrative office Alex Pedersen was vice president of media company Jysk Fynske Medier and a professional cyclist who took part in organising the Giro d’Italia in Herning and Horsens in 2012.

“The best cycling city in the world"

The slogan of the Danish Grand Départ is “The greatest cycling race in the world meets the best cycling city in the world", with the latter title conferred by the Copenhagenize Index.

There are 5.6 times as many bikes as there are cars in Copenhagen, with almost half of the locals cycling to work and school on 379 kilometres of designated cycling paths.

In 2015 Denmark was named the most bike-friendly country in Europe by the European Cyclist Federation. Cycling accounts for 26 per cent of all trips less than 5 kilometres in Denmark and 16 per cent of all trips. The average Dane cycles 1.6 km per day. The country has 12,000 km of marked cycling paths.

Mikkel Aarø-Hansen, CEO of Wonderful Copenhagen said: “Biking is a vital part of the lifestyle in Copenhagen where bikes actually outnumber cars. Copenhagen is a true bike and a top event city – ranking number 8 at Sportcal’s Global Sports Cities Index. Copenhagen is therefore the perfect place for a Grand Départ, and we are looking forward to welcoming the world of existing and going-to-be bike enthusiasts to our city.”