Home
»
News
»
The democratisation of FIFA 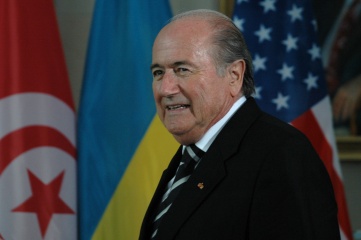 Sepp Blatter pictured in Berlin in 2006. Since then, the World Cup has been awarded to South Africa, Russia and Qatar

Sepp Blatter is often characterised in the western media as a dictator, but should his claims to be a force for democracy be taken seriously?

Joseph “Sepp” Blatter’s surprise announcement on June 2 that he was resigning as president of FIFA was sensational, not least because it happened just four days after his re-election for a historic fifth term.

Blatter’s rivals for the presidency – Jerome Champagne, Luis Figo, Michel Van Praag and of course Prince Ali, who was the only challenger left standing at the FIFA Congress – all based their campaigns on a common message: the organisation was tainted with allegations of corruption and needed to clean its image.

Blatter, on the other hand, barely uttered a word to the press during the run up to the election – even when investigators raided the Baur au Lac Hotel in Zurich to arrest a number of officials on corruption charges.

In the election, Blatter emerged victorious but storms continued to gather, including allegations that FIFA administered a $10m bribe from South Africa to CONCACAF president Jack Warner. As media reports emerged that Blatter was himself under investigation by FBI and US prosecutors, he announced to the world – at just a couple of hours’ notice – that he was to step aside.

What was perhaps most extraordinary about Blatter’s resignation speech was that he used it as an opportunity to position himself as a reformer at heart, shackled by circumstances. His resignation, he said, was necessary to make way for “structural changes” that he had himself been advocating for many years.

These changes including loosening the grip of the continental confederations through which FIFA’s members are aligned, a reduction in size of the Executive Committee – presumably to give non-ExCo FIFA members greater influence – and capping terms of office.

Whatever you may think of Blatter’s claims to be a democratiser, a process of reform is now inevitable. While it might have taken external events to drive FIFA to the brink, at last it can contemplate the reform it needs.

Football remains the world’s most popular sport and the FIFA World Cup its biggest single sport event. And if democratisation may not be Blatter’s true legacy, FIFA has undeniably embraced all regions of the world under his presidency.

Anything can happen now, depending on the outcome of further investigations, which are by no means focused exclusively on the hosts of the future World Cups. The world waits.