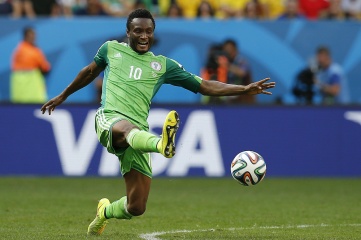 Nigeria is the reigning champion of the Cup of Nations

The Confederation of African Football (CAF) has sprung a surprise by unveiling the host countries for three editions of its flagship Cup of Nations international tournament.

Cameroon and Ivory Coast were awarded the hosting rights for the 2019 and 2021 editions of the event, but the decision to grant the 2023 tournament to Guinea came as a shock.

Guinea tabled a bid to host either the 2019 or 2021 tournaments, with Conakry, Kankan, Labe and Nzerekore set to serve as the host cities.

Although the country has never hosted the Cup of Nations before, a CAF spokesperson told UK public-service broadcaster the BBC that Guinea’s impressive presentation “and commitment” had led the confederation to “exercise its power to make an immediate decision” to award the 2023 hosting rights.

Cameroon and Ivory Coast are established football nations and both have hosted the tournament on one previous occasion.

Cameroon, which staged the event in 1972, will use host venues in Bafoussam, Douala, Garoua and Yaounde in 2019.

The Ivory Coast hosted the tournament in 1984. The country will host matches across the cities of Abidjan, Bouake, Korhogo, San Pedro and the capital Yamoussoukro in 2021.

In January, CAF announced that a total of six bids were submitted for the 2019 Cup of Nations, from Algeria, Cameroon, Ivory Coast, Guinea, DR Congo and Zambia, while three countries – Algeria, Ivory Coast and Guinea – tabled offers to stage the 2021 edition. DR Congo withdrew its bid two months ago.

However, the host of the 2017 Cup of Nations has still not been decided after Libya gave up its hosting rights due to security concerns in the country.

CAF, which has set a deadline of September 30 for bids, is expected to make a decision next year. Algeria, Ethiopia, Ghana, Kenya, Mali and Zimbabwe have all expressed an interest in bidding.

Nigeria (pictured) won the most recent edition of the Cup of Nations in South Africa in 2013, and Morocco will host the 2015 tournament from January 17 to February 8.