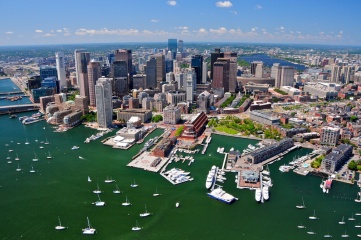 A compact, walkable, sustainable Games is the offer that won

The US Olympic Committee chose Boston on Thursday as the city that will bid for the 2024 Summer Olympic Games, over competing offers from Los Angeles, San Francisco and Washington, D.C. The battle to win public support starts here

The US Olympic Committee chose Boston on Thursday as the city that will bid for the 2024 Summer Olympic Games, over competing offers from Los Angeles, San Francisco and Washington, D.C.

Boston has proposed a low-cost, regional and sustainable Games in keeping with the ideals of Olympic Agenda 2020, the new framework adopted by the IOC in December within which the bidding procedure for 2024 will operate.

The engagement of public and private stakeholders in Boston’s proposal is said to have outshone its rivals.

“One of the great things about the Boston bid was that the bid leadership and the political leadership were on the same page,” Scott Blackmun, chief executive of the US Olympic Committee told the Boston Globe.

The White House gave a statement of presidential support for Boston, saying “The city has taught all of us what it means to be Boston Strong” – a reference to the slogan adopted by the city in the wake of the 2013 marathon bombings.

The decision was also welcomed by IOC president Thomas Bach, who said “The Boston bid will be a strong one.”

A major driver behind Agenda 2020 is change perceptions about the cost and benefit of hosting the Olympic Games. Boston proposes to spend just USD4.5bn on hosting the Games, which the bid committee says will be generated from broadcasting, sponsorship and ticketing revenues.

This figure does not include publicly funded investments in civic infrastructure, which the bid committee says the city has already committed to regardless of the Games bid.

The cost of hosting the Games would be kept down by using existing facilities, including the multi-purpose TD Garden and a number of venues operated by colleges, such as Harvard Stadium, Boston College’s Conte Forum and Boston University’s Agganis Arena.

In a proposal reminiscent of London 2012, Boston’s Olympic stadium would be temporary, hosting the opening and closing ceremonies as well as track and field events.

The US last hosted the Summer Olympic Games in 1996 at Atlanta. Since then the world’s biggest multisport event has been awarded to Asia/Oceania three times, Europe twice and South America once.

The IOC does not, however, operate a policy of continental rotation and a number of factors will determine which city is selected in 2017 as the host of the 2024 Olympic Games.

While current round of bidding for the 2022 Winter Olympic Games has suffered from a crisis in appetite for hosting the Olympic Games, particulary in Europe, the race for 2024 is shaping up to be extremely competitive.

Rome is the only other city so far to have confirmed it will bid for the 2024 Games, but a long list of other cities and regions are in various stages of evaluating and preparing bids.

The selection of Boston will perhaps be something of a surprise to anyone outside the US Olympic Committee. Los Angeles, which has hosted the Olympics twice before, was the highest profile contender. Advisors to the IOC had indicated that Washington, D.C. had the strongest technical infrastructure. San Francisco is already established as one of the world’s most popular destinations for sports, business and leisure.

Yet this is another factor behind Boston’s success: the city is new to Olympism, having never hosted or bid for an Olympic Games before. As such, it is less likely to show complacency in its bid, offering fresh pastures in an old city.

One of Boston’s biggest challenges will be garnering public support for the Games. A public meeting has been planned for Tuesday to gather feedback as the first stage of planning for the bid.