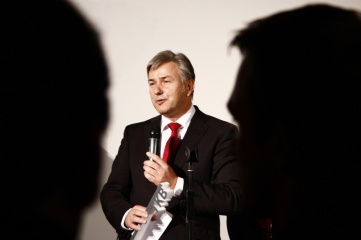 Klaus Wowereit will stand down as Berlin Mayor in December

Berlin will hold a referendum on whether to enter the running for the 2024 Olympic and Paralympic Games after unveiling its bid concept on September 1, according to Klaus Wowereit, who has confirmed that he is standing down as Mayor of the German city.

Berlin and Hamburg are interested in bringing the Summer Olympics to Germany for the first time since Munich hosted the 1972 Games, and the former has confirmed that it will submit its answers to a questionnaire sent out by the German Olympic Sports Confederation (DOSB) by the end of this week.

“We will answer the questionnaire of the DOSB and will then unveil our concept on September 1,” Wowereit told a press conference. “I am confident that we will answer those questions well. After that there will be a vote for all Berliners to decide. We want the widest possible support for this.”

However, Wowereit will not oversee the possible realisation of Berlin’s Olympic ambitions after confirming at the press conference that he will step down as Mayor on December 11 after 13 years in office.

Wowereit, who has been widely criticised for delays and the spiralling cost of developing the unfinished Brandenburg Airport in Berlin, added: “I am leaving voluntarily and I'm proud to have made my contribution to the positive development of this city.”

It is unclear whether the departure of Wowereit may influence Berlin’s potential bid for the Games, but a spokesperson for his office told HOST CITY: “It was unexpected. We are all very surprised here.”

Berlin previously staged the summer Olympics in 1936, but failed in a bid for the 2000 Games after being eliminated in the second round of voting, with Sydney in Australia ultimately emerging victorious. The DOSB also opted to support Leipzig rather than Berlin for a tilt at the 2012 Olympics, although London in Britain eventually secured the hosting rights.

Other potential bidders for the 2024 Games include Baku (Azerbaijan), Doha (Qatar), Dubai (UAE), Istanbul (Turkey), Paris (France) and Rome (Italy) with South Africa also mulling over a possible bid and the US set to select an applicant city from a shortlist comprising Boston, Los Angeles, San Francisco and Washington DC.