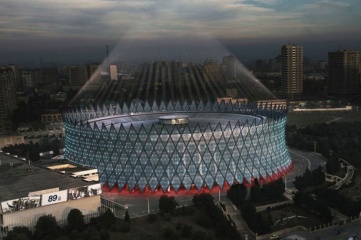 European Judo Championships, a Rio 2016 qualifier, now forms part of Baku 2015 after sponsorship issues led to the hosting rights being taken from Glasgow

Judo is the first European Championships to be integrated with the European Games. The Games now offers the opportunity for athletes to qualify for the Rio 2016 Olympic Games.

Glasgow’s Emirates Arena was due to host the Games on 9-12 April this year but the EJU withdrew the hosting rights from the BJA on 14th February.

This was reportedly due to concerns over a sponsorship agreement that would have seen the Ultimate Fighting Championship promote the European Judo Championships to its audience of mixed martial arts.

“The European Judo Union has come to the realisation that the British Judo Association does not fit the EJU criteria to host the EJU flagship event,” the EJU said in a statement last weekend.

“The BJA had entered into a sponsorship agreement which did not meet the EJU values.”

Within the space of a week, a new host city has been allocated. The event has now been incorporated into Baku 2015’s judo competition, to take place during the final four days of the inaugural 2015 European Games, which takes place from 12 to 28 June.

“After the cancellation of the event in Glasgow, our priority was to find a new host as quickly as possible. We have done this and I am very happy with our choice,” said Sergey Soloveychik, President of the EJU.

“Baku 2015 has a world-class judo venue with supporting facilities which will help Europe’s elite judoka reach peak performance in June.

“For all the judo fans who have already bought their tickets for Emirates Arena in Glasgow, they will have an opportunity to get free tickets to the judo venue in Baku.”

The decision to incorporate the European Championships into the Games ensures that Europe’s top judoka will be competing at Baku 2015, as the Championships is a qualifying event for Rio 2016.

“This decision further strengthens the European Games with 12 of the 16 Olympic Sports now offering direct or indirect qualifying opportunities for the 2016 Olympic Games in Rio de Janeiro,” said Azad Rahimov, chief executive officer of Baku 2015 and Azerbaijan’s minister of youth and sport.

Other sports offering qualification opportunities for Rio 2016 are archery, athletics, boxing, cycling, shooting, swimming, table tennis, taekwondo, triathlon, volleyball and wrestling. There are 20 sports in total at the European Games, which is administered by the European Olympic Committees (EOC).

Judo is the first European Championships to be integrated into the European Games.

“The EOC has always intended for European Championships to become part of the European Games and this agreement indicates that our aim is coming true, even earlier than we had anticipated,” said EOC president Patrick Hickey.

“I am sure other sports will follow suit at future editions of the European Games and that the event will become one of the main qualification routes for the Olympic Games.”

Despite the decision to move the EJU Champsionships to Baku, Scotland retains a strong portfolio of events after hosting the acclaimed Commonwealth Games and Ryder Cup in 2014.

“Scotland has a huge amount to offer in terms of its natural assets, its people and its infrastructure,” Paul Bush OBE, chief operating officer of EventScotland told HOST CITY.