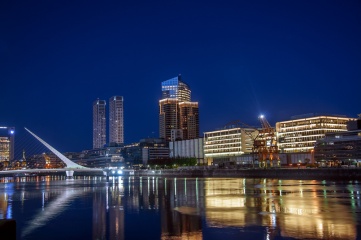 The Argentine Olympic Committee (COA) has pushed forward its claims for a future edition of the summer or winter Olympic Games and identified the Patagonia region as a contender for the latter.

The COA is currently pressing ahead with preparations for Buenos Aires’ staging of the 2018 Youth Olympic Games, with the event being seen as a potential springboard for a tilt at the Olympic Games itself.

In a statement, the COA said that it would be “an honour” to bid for either edition of the Games and pinpointed Patagonia, utilising the Andes Mountains, as a potential option for a winter Olympics.

An Argentine winter Olympics would break new ground for the International Olympic Committee, with the event having never previously set foot outside the Northern Hemisphere.

Argentina’s last bid for the summer Games saw Buenos Aires eliminated in the first round of voting as Athens went on to clinch the 2004 event. The Games will take to South America for the first time in 2016 when Rio de Janeiro hosts the event in Argentina’s regional rival, Brazil.

The COA’s statement comes after the IOC last week praised Buenos Aires’ hosting plans for the 2018 Youth Olympic Games, which will focus on engaging with the city’s sizeable inner-city population. The IOC stated that the city had already made “impressive headway” in its preparations for the event, which concluded its second edition in Nanjing, China on August 28.

Buenos Aires was awarded the 2018 Youth Olympics in July 2013. The city beat Colombian city Medellin by 49 to 39 votes in the second round of voting by IOC members. In the first round, Scottish city Glasgow was eliminated after getting only 13 votes, compared to 40 for Buenos Aires and 32 for Medellin.