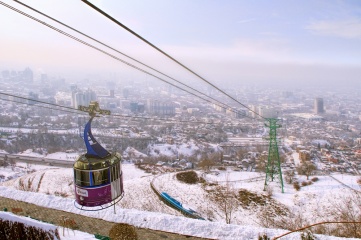 Almaty is bidding against Beijing for the 2022 Olympic Games

Almaty would need to secure extensive private investment to fund the 2022 winter Olympic Games after Kazakhstan’s Ministry of Culture announced the state would only provide a third of the budget should the city defeat the opposing bid for the event from Beijing.

The Tengrinews website said Kazakhstan’s Vice-Minister of Culture and Sport, Tastanbekov Yesentai, cited the example of this year’s winter Olympics in Sochi, where the Russia authorities successfully implemented a mixed funding model and also pointed towards Tokyo’s projected revenues for the 2020 summer Olympics as arguments in favour of his government’s approach.

Yesentai said: “Russia has used a mixed model at the Olympics in Sochi. Their income made $10bn (€7.9bn). Japan has officially declared that it would be able to earn $30bn from hosting the Tokyo Summer Olympic Games in 2020.

“We also want to stick to the mixed model of financial management, in which the share of state involvement would be 33 per cent and the rest will be raised by investors. In that case we will be able to hold the Olympics in 2022 at a proper level.”

Concerns regarding state financing for hosting the 2022 winter Olympics have become a central theme of what is now a sparse bidding process.

Almaty and Beijing are the only two cities left in the running after Oslo withdrew from the race at the start of this month. The Norwegian government decided against providing the required financial support to host the multi-sport event due to prohibitive projected costs.

Oslo was the latest in a long line of cities to end a bid, following Stockholm in Sweden, Krakow in Poland and Lviv in Ukraine, while bids from St. Moritz in Switzerland and Munich in Germany were scrapped after public referendums.

Meanwhile, Kazakh Olympic Committee vice-president Pavel Novikov has rejected calls for Almaty to share Olympic hosting rights with Astana, acknowledging Olympic bidding rules that the Games must be awarded to a single city.

The International Olympic Committee will select the host city for the 2022 Games on July 31, 2015.