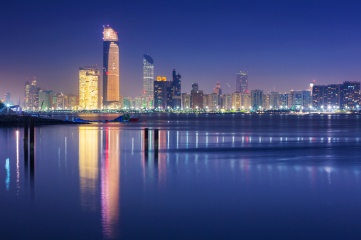 Abu Dhabi will host a round of the World Triathlon Series

Abu Dhabi Sports Council (ADSC) has agreed a five-year deal with the International Triathlon Union (ITU) to host a round of the World Triathlon Series (WTS).

Under the deal, the capital of the United Arab Emirates will make its debut on the series' calendar by hosting the first event of the 2015 campaign on March 6-7. The deal will run until 2019.

“This is a partnership which represents a meeting of like minds in terms of ambitions,” ITU president Marisol Casado said. “Abu Dhabi is a world-class city and offers a fantastic combination of beautiful water and superb road infrastructure that is entirely suitable for a WTS event.

“In our talks leading up to the partnership it became apparent that Abu Dhabi wants to take its triathlon to the next level and expand the sport's reach in much the same way as ITU is determined to progress the sport internationally.”

While a first-time ITU race, Abu Dhabi has organised triathlons for age groups and professional triathletes in recent years. British athletes Alistair and Jonathan Brownlee, who collected gold and bronze at the 2012 Olympics respectively, are familiar with the race, with Alistair having won in 2013, and the brothers having crossed over together last year.

The event, slated as a sprint for the elites with both standard and sprint races on offer for age groupers, will be headquartered at the Abu Dhabi Sailing & Yacht Club where a 2,000-seat grandstand, a bike park, a 'Friends and Family' area, refreshment kiosks and kids zone will be built. It will also feature a 'swim start' off the Volvo Ocean Race yacht pontoons on Abu Dhabi Corniche - a first for the series.

His Excellency Aref Al Awani, general secretary of ADSC, said: “We envisage a host of benefits emerging from this partnership. These include further positioning of Abu Dhabi as a destination for world-class sporting events, additional destination exposure among an influential client base, encouragement of our own youth to join in one of the world's fastest-growing Olympic sports and the promotion among our own community of the benefits of healthy lifestyles.”

Abu Dhabi is the only new stop on the 2015 calendar. Gold Coast in Australia (April 11-12) will return for the first time since 2009, while the ITU also confirmed that the World Triathlon London event will take place on May 30-31.