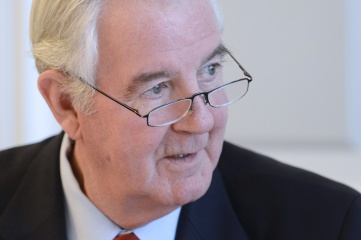 Sir Craig Reedie will open Host City 2015, which focuses on the theme of "Creative Innovation Connecting Cities with Sports, Business and Cultural Events"

Looking forward to HOST CITY 2015, Sir Craig Reedie talks exclusively about the IOC’s process of transformation and the candidates for the 2024 Olympic Games

HOST CITY: The IOC must be very pleased with the pool of cities bidding for the 2024 Olympic Games?

Sir Craig Reedie: Yes I think we are. It’s quite interesting that the change in the candidature rules, which came out of the whole reform process called Agenda 2020, seems to have attracted a very considerable field of really good cities.

We are now waiting for further information from Paris, from Hamburg, from Rome, from Budapest and from a North American city – eventually, Los Angeles.

HOST CITY: It must have been a relief when Los Angeles stepped forward – was that anticipated?

Sir Craig Reedie: Yes, I think the USOC have all but admitted that their process might not have worked in the selection of Boston. But, with Boston’s withdrawal, they were fortunate in many ways that the Los Angeles people were so able to come to the party very quickly and in a relatively tight timeframe, because they had a number of things to agree with Los Angeles city before the necessity of putting in a formal bid on the 15th of September.

Los Angeles has an Olympic record – if they win they will be like London, hosting the third time. The city has changed dramatically over the last few years and I am sure they will come forward with a very good bid.

HOST CITY: And the other cities represent a different spread to what we’ve seen in recent bidding procedures.

Sir Craig Reedie: Yes, it’s an interesting mix. Paris is looking to celebrate the 100th anniversary of the 1924 Games in Paris and has clear bidding experience.

Rome hosted outstanding Games in 1960 and there seems to be considerable enthusiasm in Italy and in Rome behind the Rome bid, so they are impressive.

Budapest has come quite late to the party but again a splendid city and Hungary has a terrific Olympic record.

It’s interesting that when the German Olympic Committee decided to choose Hamburg as opposed to Berlin, who I suppose before that decision would have been seen to be favourite, immediately there was strong support from Berlin for the Hamburg choice. So again there seems to be a great deal of unity there.

So it’s a really good field.

HOST CITY: The Olympic bidding process has changed, hasn’t it – after the new invitation phase, we are now straight into the candidature phase.

Sir Craig Reedie: You have to go back a few years to when the system changed from one bidding system into a two phase system – applicant and then candidate. That has now been refined and the big addition has been the invitation phase before a National Olympic Committee decides finally to put a city into the candidature role.

The closing date was 15 September. So for several months before that, cities that were thinking of bidding for the Games, and the National Olympic Committees, came to meet the relevant people in the Olympic Games department and the candidate cities department of the IOC to sit down and work out exactly how the Games would fit into their city; how it would provide legacy; how it would be sustainable; how it would fit into city plans. And the cities were given a great deal of information from the IOC, as it does have a great deal of information from previous bidding processes.

That’s a complete change from the previous process, where the IOC had a very detailed list of requirements and cities bid against that list.

So there is a major change there and I understand that it has been welcomed by the cities, all of whom have been to see the IOC in the invitation phase, and by other cities who went and subsequently decided not to bid but learned a great deal from the exercise and may do so in the future.

And then we come to the candidature phase, which is divided into three parts.

The first part, which runs until June 2016, is the Vision, Games Concept and Strategy and the candidate city’s “bid book” will be submitted electronically. There will be consultation with the IOC throughout and at the end of that first phase the Executive Board will decide whether the cities will move to the second phase, which runs from June to December 2016 and deals with governments, legal matters and venue funding.

Again, the presentations will be made through the IOC with a great deal of assistance and the Executive Board will again make a decision on moving people forward to the third phase, which is Games Delivery, Experience and Venue Legacy and runs from December 2016 through to the selection in September 2017.

So rather than one huge bid book being required at a set date, it’s divided into three sections. There are workshops planned; there are assistances planned to the cities throughout.

HOST CITY: is there any possibility that any of the cities might not proceed beyond each of these particular stages?

Sir Craig Reedie: The whole point of the exercise with the IOC is to help them to get presentations and plans submitted that actually fit not only what the IOC wants for good Games but also what the cities want themselves. There’s an element of skill and discretion needed in doing that; the IOC have to deal with information from one city on a confidential basis and they have to be fair with all five cities. And if they do that, the system will work.

It is not beyond the bounds of possibility that a city could come back and say we’re not taking it any further – I think that’s unlikely in the sense that a lot of work will have gone into this, a lot of discussions have gone on through the invitation phase. And since it’s going on through a stage by stage basis I think it’s highly unlikely that people will withdraw.

The end result of that is that we will have five cities presenting to the Session on the ultimate decision to be taken in Lima in Peru in 2017.

HOST CITY: Five is a very good number of cities.

Sir Craig Reedie: It’s a very good number. I have very warm memories of five cities presenting in 2005 in Singapore.

HOST CITY: And this is all the result of a process of change initiated by IOC President Thomas Bach, which is reflected by the broad theme of the HOST CITY 2015 conference, “Creative Innovation”. Why the need for change in the IOC?

Sir Craig Reedie: I think the principle that Thomas Bach enunciated, to change or change will be forced upon you, is a good one.

People forget that the previous bidding process was certainly the gold standard in sport the world over. If you find that there is a reluctance to bid – and clearly there was an element of that in the 2022 Winter Games situation – then perhaps you should be prepared to do a little bit of out of the box thinking.

And the whole Agenda 2020 process started with two long four or five day meetings of the Executive Board which were effectively a think tank. We ranged all over the place and at the end of the day came up with a coordinated and sensible view of how we wanted to run the Games but also to promote the Olympic movement for the future.

So therefore a process of change is a perfectly reasonable thing to undertake.

HOST CITY: What are your expectations of HOST CITY 2015 in Glasgow?

Sir Craig Reedie: From my point of view of being involved in HOST CITY 2015, I am delighted that the event is coming to Glasgow, because Glasgow has shown that it is a sporting city with the way it has developed its facilities, the way it ran a major multi-sport event, the Commonwealth Games in 2014, and what it’s been doing since then – not least a couple of hugely successful Davis Cup tennis ties.

So if you look at the excitement that generates locally, and the promotion that it gives the city on a worldwide basis, then I think this indicates that the market out there is a buoyant one.

Cities should be very well prepared to become involved and therefore they should be thinking ahead; they should be innovative – and with a bit of luck they will reap the benefits that Glasgow has.