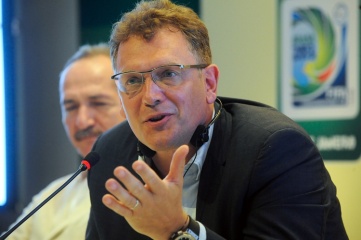 Gilbert Felli, the IOC Olympic Games executive director and Jérôme Valcke, the General Secretary of FIFA, are to share the stage with other major figures in sports events to discuss the legacy of the 2014 World Cup and the 2016 Olympic Games.

The conference, which is hosted by the International Centre for Sports Studies (CIES), takes place in French on 6 May at the Expo Beaulieu Lausanne. Other speakers include CIES director and IOC member Denis Oswald, lawyer and former IOC executive director François Carrard and sports architect Miranda Kiuri.

The meeting comes at a time when both Valcke and Felli have been closely scrutinising the progress of the FIFA 2014 World Cup and the 2016 Olympic and Paralympic Games. Both events are experiencing serious delays that have threatened to impact the successful delivery of Brazil’s mega-sports events. Any problems in event delivery would reflect badly on the host nation and have a knock-on effect on legacy plans.

“The results of such major sporting events are never guaranteed and therefore the legacy is always a theme of discussion, notably because of the costs incurred,” the CIES said in a news release on Thursday.

“It is true that some countries have been able to deal with legacy better than others and for this reason CIES has decided to host this round table and gather experts just before the FIFA World Cup and the 2016 Olympics. This conference will allow everyone to better understand this challenge and its related issues, as well as the real legacy to these two major Brazilian competitions.

More information about the event  is available at http://www.cies.ch/cies/agenda/