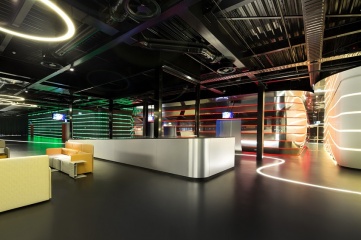 RAID 2016 will take place at Jaarbeurs, the largest and most accessible venue in the Netherlands

The inaugural World RAID Congress, taking place at Jaarbeurs in Utrecht, the Netherlands on 31stMay – 1st June 2016, will be the largest cross-sector disruptive innovation event in Europe this year.

RAID stands for Robotics, Artificial Intelligence, Internet-of-Things and Data – the technological mega-trends that are transforming the world today. RAID informs the industry sectors of Energy, Finance, Healthcare and Transport, with a special focus on Cities.

Aimed at cross-sector C-level business and city leaders, RAID is an opportunity to learn from peers and experts about how to cope and innovate in the face of disruptive changes to established business sectors.

Alongside technology providers, city leaders will demonstrate how they are investing in RAID technologies to advance economic and social development.

The format will be one of cross-sector plenary panel discussions with VIP speakers on Day One, followed by dedicated streams for Auto/Transport, Cities, Healthcare, Energy and Financial Services on Day Two.

The Cities stream at RAID is set to begin with VIP addresses on “The Challenges and Opportunities of RAID for Cities”.

A panel on “Energy in Transition” will discuss urban utilities for increased efficiency, smart and decentralised grids, RAID and urban renewables.

A session on “Urban Transport” will look at the impact of driverless vehicles and car sharing, the challenges of intercity transport management, AI and Intelligent transport systems for traffic management.

A panel on “Creating Healthier Cities through RAID” will examine how cities can integrate technology and health, while a session on “Urban Development, Security and Investment” will discuss how RAID technologies can make cities safer and economically stronger.

RAID will take place on 31st May – 1st June 2016 at Jaarbeurs, the largest and most accessible venue in the Netherlands, just 20 minutes from Schiphol Airport.  The host city of Utrecht is ranked by the European Commission as the most competitive place in the EU to do business.

The event is attracting a minimum of 500 attendees in its first year, with delegations confirmed from UK, China, Germany, France, US, Norway, Sweden and Denmark.

RAID is organised by Cavendish Group, which also stages the International Capital Conference and Host City, in partnership with Jaarbeurs and with strong support from industry organisations in France, the UK, Germany, the Netherlands and China.

Register here for the go-to event for cross-sector disruption and to find out about speaking opportunities contact ben.avison@cavendishgroup.co.uk