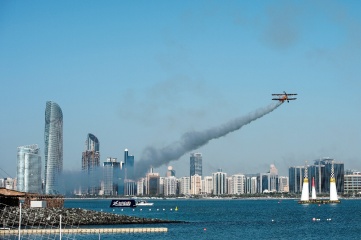 Brietling Wing Walkers perform during a side act prior to the finals of the first stage of the Red Bull Air Race World Championships in Abu Dhabi, UAE in March 2016 (photo: Red Bull Air Race)

By combining top-level motorsport and the human fascination with flight, cities that host the Red Bull Air Race see an economic push for the city and their tourism goals take off

Created in 2003 but officially a World Championship in 2005, the Red Bull Air Race will mark its 75th race in 2017 and is watched by millions of fans. The official world championship sanctioned by the FAI (Fédération Aéronautique Internationale) is a visual spectacle unlike any other. Using fast, agile, lightweight racing planes, pilots reach speeds of 370kmh while enduring forces of up to 10G as they navigate the 25-meter-high, air-filled pylons of a low-level slalom track – the ultimate motorsport series in the sky.

From windswept Tokyo Bay to the heart of Budapest, and from America’s dramatic desert to Europe’s towering Alps, Red Bull Air Race puts the global spotlight (over 2,000 media from 37 countries in 2016) on an exclusive number of destinations each season. Eight stops are planned next year. The ultimate goal for Red Bull Air Race is 15 races per calendar year.

“For our partners, we bring a wealth of experience in what works, but it’s not a cookie-cutter approach. We actively collaborate with the host cities and business partners so that entertainment and revenue opportunities can be tailored specifically to each location,” says Red Bull Air Race Commercial Director Pavel Turek. “Families often spend a full weekend or more in the host region because there’s so much to see and do.”

Venues like the UK’s Ascot Racecourse, the city of Budapest, Indianapolis Motor Speedway and the waterside facilities in Chiba, Japan have seen their grandstands completely sell out. At the 2014 race in Gdynia, Poland, officials closed access to viewing from one of Europe’s longest beaches upon reaching the mandated civic limit of 130,000 people.

Abu Dhabi has hosted the season opener nine times so far, and a 2015 study found that visitors spent an average of three days in the city, with 76% citing the Red Bull Air Race as the main reason they came and asserting that they would recommend the event to acquaintances, and a full 91% declaring that the race enhanced their positive image of the location.

In Croatia, the Ministry of Tourism awarded "Best Tourist Event" to the Red Bull Air Race Rovinj in a nationally broadcast ceremony attended by the country's Prime Minister.

"This event is exceptional," said Darko Lorencin, Croatia's Tourism Minister. "This is one of the best examples how to create motives for attracting tourists to come."

Just as the race teams never stop looking for ways to improve the performance of their raceplanes, the race organizers are always striving to heighten the experience and the outcomes at new locations.

“The Red Bull Air Race delivers top-level motorsport in a way that people have never seen. One moment they’re touring the hangars and getting autographs from their heroes, and the next they’re watching those beautiful raceplanes speeding past – not as little dots in the air, but right in front of them,” explains Red Bull Air Race General Manager Erich Wolf. “And always – always – safety is paramount. Our race rules and procedures are the result of years of careful study, and we’re proud of our safety record.”

When the legendary Indianapolis Motor Speedway hosted the Red Bull Air Race for the first time in October 2016, the event drew hundreds of media contacts and saw crowds of 62,000.

“Our intent is that this is going to be an annual event,” stated Indianapolis Motor Speedway president Doug Boles. “It's spectacular.”

Looking ahead, 2017 marks the 10th season where Red Bull Air Race will continue to expand and grow through their strong partnerships with prestigious brands, spectacular stops to the calendar and advancement in aviation and air racing.