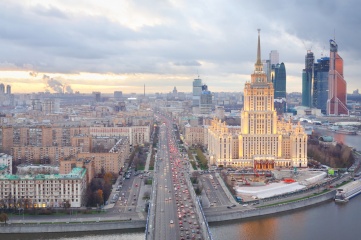 Moscow suffers from the longest traffic jams in the world

Russia, with a population of just over 140 million, spans continents. Its sheer scale, coupled with some harsh weather conditions and very large cities, provides plenty of challenges for transportation.

As Igor Levitin, Russian Minister of Transport put it, “Due to the geographical peculiarities of the Russian Federation and those of the territorial location of its production forces, transport has always been considered in Russia as a key economic sector providing for the country’s economic and political integrity.

“In some major cities such as Moscow, Saint Petersburg and Nizhny Novgorod, which are in a critical situation with regard to road congestion, a range of measures is underway aimed at increasing the capacity of the cities’ road network, limiting the use of personal vehicles and motivating the population to use public passenger transport.”

According to Vladimir Kryuchkov, CEO of ITS Russia, “The understanding is growing gradually that the limited access of personal and cargo vehicles to central parts of the cities and more tough parking policy are inevitable.”

In Moscow, the average traffic jam lasts 2.5 hours – the longest in the world. With 2.6 million cars in the city on a daily basis, a lack of parking space is also on the list of problems.

Speaking to the ITS Moscow conference in 2013, the city’s deputy head of transport, Tatiana Malashenkova announced plans to reduce the length of average journey times in the city to 50 minutes. This is to be achieved by reducing car journeys by 30 per cent and increasing public transport journeys by 40 per cent.

NIS, a Russian public-private company, has been tasked with developing and deploying a ERA-GLONASS GPS system throughout the Russia, which involves fitting GLONASS satellite navigation communication devices, or terminals, into all new vehicles sold in the country.

In the event of an accident, the terminal is automatically activated and transmits the vehicle location and other key information to an emergency response centre, allowing the swift intervention of the emergency services.

The ERA-GLONASS system will help to reduce the number of fatalities and injuries on Russia's roads and boost the safety of both freight and passenger transport. In addition, NIS plans to develop commercial applications for GLONASS and create a mainstream market for navigation services and devices.

The communication carrier for the ERA-GLONASS system is 3G. This requires additional infrastructure to be provided to ensure that there is sufficient coverage, not only in cities but also across the Russian strategic road network. This will open up the possibility for additional ITS devices to be utilised in Russia.

Commercial vehicles are also being targeted for ITS deployment. A nationwide tolling system is in development for vehicles weighing more than 12 tonnes, again using the GLONASS GPS system.

In November 2013, NIS and Kapsch TrafficCom were among four companies that tendered for the project, which is being administered by the federal road agency, Rosavtodor and is scheduled to run for 13 years.

ERTICO and ITS Russia are working together to research, develop and deploy ITS technologies. A number of areas for cooperation have been highlighted, including a pilot of the “eCall” system, which enables crashed cars to call emergency services automatically.

Another area for cooperation is ITS for large events, particularly in the context of the FIFA World Cup in Russia in 2018. Another target is to improve traffic and traveller information for transport corridors, especially the Helsinki to St Petersburg corridor.

The “Smart Transport Corridor: Helsinki – St. Petersburg” project aims to create a continuous and interoperable intelligent transport service between Finland and Russia, while increasing the interoperability of services between the EU and Russia.

The aim is to improve commuter services, boost traffic safety and make traffic flow more smoothly, especially at the border. The project also aims to increase cooperation between Finnish and Russian private and public sector operators and facilitate the growth of business in the intelligent transport area.

These services are being implemented by a consortium founded by private companies and will be demonstrated in Helsinki at the ITS Europe Congress 2014.