Home
»
News
»
Rio’s transformation will be best ever – Nuzman 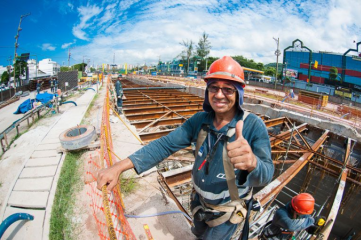 In advance of his presentation at HOST CITY: Bid to Win, Carlos Nuzman says Rio’s regeneration will outshine that of any previous host city

As venue construction finally starts to shift up a gear in Rio, the president of the Rio 2016 organising committee has pointed out that the wider developments in the city will have a bigger impact on Rio than any other Olympic city in history.

Speaking on the two year countdown to the Games, Carlos Nuzman said “The Games will leave a huge legacy for both Rio and Brazil, and are starting to take shape. No other host city will have had such big transformational benefits from the Games as Rio.”

Carlos Nuzman is the latest of many distinguished speakers confirmed to speak at HOST CITY’s Bid to Win conference on 28th October in London, where he will give an exclusive presentation.

The civic developments include a massive facelift of the historic port area, major transport upgrades, sanitation improvements, anti-flood measures as well as new educational facilities. These projects are being accelerated through 27 government initiatives in the areas of infrastructure, the environment and social improvement.

The future of the Olympic sports facilities are also being taken into consideration as part of the legacy plans. The Olympic Park’s three sports halls – the Maria Lenk Aquatic Centre, the Rio Olympic Velodrome and the Olympic Tennis Centre – will remain in use after the Games, collectively forming Brazil’s first Olympic Training Centre (OTC) for high-performance athletes.

The fourth Olympic hall, which will host handball matches during the Games – will be repurposed into four schools. “Converting the Rio 2016 handball arena into four schools after the Games is an excellent example of Rio’s commitment to ensuring the 2016 Games leave tangible benefits for the local community,” said Nuzman.

“The ‘nomadic architecture’ concept defined by our government partners is a first for the Games and we are proud that 2,000 Brazilian schoolchildren will benefit from it for many years to come.”

Sports events in 2016 will take place in widely dispersed areas in Rio. The Maracanã stadium is 13km north of Copacabana and Ipanema; the Barra Olympic Park is about 25km west of central Rio; while the Deodoro cluster is in a similarly distant part of town with little in the way of hospitality services.

Barra is already connected to the international airport via the Transcarioca BRT, which was built in time for World Cup, complementing another BRT service to Barra that opened in 2012.

A 32km Transbrasil bus rapid-transit (BRT) scheme will connect Deodoro to central Rio, benefitting 900,000 passengers daily. However, Transbrasil’s tender date has been delayed and work will not start until October at earliest.

A new 26km Transolímpica, due to open in January 2016, will link the competition centres in Barra and Deodoro and is expected to be used by 400,000 people per day.

The major transport upgrades also include the creation of a light rail transit (LRT) service in the city centre and the extension of the underground metro system. A new 16km underground line, Linha 4, is due to open early in 2016, linking central Rio to Barra with a predicted journey time of 34 minutes.