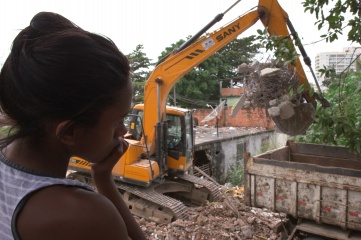 The documentary The Fighter tells the story of Naomy, 14 years old, from Rio in Brazil, and how the construction of the Mega Sporting Event infrastructures can impact on communities in particular its most vulnerable members such as children (Photo Credit: Fireworx media)

Environmental concerns have become enshrined in bidding for and delivery of major sports events, but what about human and children rights? Terre des Hommes sets out the agenda for change

Mega Sporting Events (MSEs) are not just about huge amounts of money being lavished on glamorous international competitions, as is often perceived by the general public; they are also about values.

Events such as the World Cup or the Olympic Games carry positive values for children. Practising sport can contribute greatly to the harmonious development of a child and thus, within this perspective, big events can constitute a driving force for social development.

However, large-scale sporting events pose risks for children as well. The need to create new sports infrastructure, and the subsequent obligation to relocate whole communities, can tear families apart, as shown in Rio since the city was awarded the Olympic Games in 2009. During preparations for the 2016 Olympics, and before it the 2014 World, 22,000 families were evicted from their original location.

Further to this, children in a street situation were removed and placed in overcrowded detention centres for the duration of the sporting event. Production of footballs or clothing linked to MSEs may bring cases of child labour down the value chain. Construction, with a high concentration of workers, or the event itself, with an increased number of visitors, can increase the risk of sexual exploitation for minors.

Therefore it is in the interest of all stakeholders involved in the organisation of MSEs that the positive values and benefits for children should be preserved and the risks mitigated. To that end, Terre des Hommes, a global child rights organisation active in almost 70 countries, launched a campaign called Children Win in 2014.

The campaign is based on a threefold strategy. Firstly, it documents the impacts of Mega Sporting Events on children (according to the United Nations’ Convention on the Rights of the Child, a child is defined as anyone under 18), as most recently in the case of the Rio Olympics (see the briefing paper “Breaking Records”).

Secondly, it engages in a dialogue as constructive as possible, in particular with sport governing bodies, in order:

Thirdly, the campaign monitors the implementation of the criteria and the steps taken by stakeholders connected to MSEs.

It is clear that the world of international sports has some way to go. Over the last two years, various sport governing bodies and MSE organisers have shown encouraging signs in taking into consideration the human rights and children rights dimensions in the bidding process. Efforts need to be pursued at two levels:

If sport governing bodies still want host countries to be interested in receiving a Mega Sporting Event, the argument of sustainability not only in environmental terms, but as well in regards to the respect for human rights, needs to be strengthened and advertised. Such elements certainly influence the choice of potential host to start preparing a bidding file and take the long road towards the organisation of inspiring global events.

It is too early to tell if this wind of change , which demands that human rights considerations are part of the process during the organisation of MSEs, will blow steadily and bring about the required change of mindset. However Terre des Hommes and its campaign Children Win will continue unabated to work so that children rights get respected by Mega Sporting Events.

Ignacio Packer, CEO of Terre des Hommes, is speaking at Host City 2016 in Glasgow on 21 November on the panel “Has Sport Lost its Integrity and How Can it Win Confidence Back”