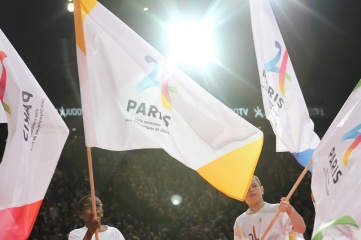 Ten measures have been unveiled to encourage the practice of sport for young Parisians.

The City of Paris, the Paris Academy and the French National Olympic and Sports Committee (CNOSF), have launched a new initiative to promote sport and the purpose of Olympism to up to 275,000 Parisian students.

Ten measures were unveiled to encourage the practice of sport, a powerful legacy for younger generations that is fully in line with the bid’s vision for the 2024 Olympic and Paralympic Games.

Speaking from Francois Villon School in central Paris, Paris Mayor Anne Hidalgo said: “This initiative is a further demonstration of the importance we place on the Olympic and Paralympic Games.

“We want the Games to benefit Parisians and the entire French population, leaving a strong legacy for young people and future generations to have positive Olympic values embedded into their daily lives. I welcome the action of the Ministry of Education, which is committed to joining the City of Paris and the sporting world in this ambition.”

The 10 measures that will be implemented from 2017 onwards by the City of Paris, the Paris Academy and the CNOSF are as follows:

Tony Estanguet, co-chair of Paris 2024, said: “This great initiative by the City of Paris, Paris Academy and the CNOSF will increase the opportunities for young Parisians to get involved in sport. It is also a great pathway for our Generation 2024 athletes to achieve their goals.

“These measures are a further example of the strong unity that exists between the bid, the city, our NOC and our partners, and our common purpose to deliver a Games that not only benefits the local population but leaves a significant and lasting legacy on future generations.”