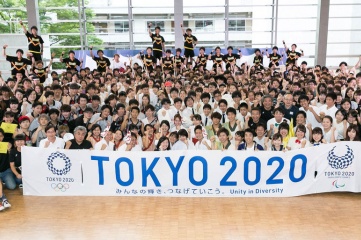 The organisers of PyeongChang 2018, Tokyo 2020 and Beijing 2022 realise the ideals of Olympism through activities that link sport to culture and education

[Source: IOC] As the next hosts of the Olympic Games, the organising committees for PyeongChang 2018, Tokyo 2020 and Beijing 2022 each featured celebrations of art, culture and sport for thousands of people on Olympic day.

With less than eight months to go until the Olympic Winter Games PyeongChang 2018, the Korean organisers seized on Olympic Day as an opportunity to spread the Olympic values far and near.

In Gangneung, the PyeongChang 2018 House featured a mascot photo zone, colouring projects and an Olympic torch exhibition. The festivities spilled over into Saturday, with opportunities for children to craft their own clay mascots, while families also tested their Olympic knowledge with interactive quizzes.

On the other side of the country in Seoul, students from Seoul University formed 70 dance teams at the Seoul Olympic Park and Lotte World Mall to create flash mobs that also featured Soohorang, PyeongChang’s mascot for next February’s Olympic Winter Games.

While PyeongChang got creative on Olympic Day, Tokyo combined art with action, as students from 12 universities across the city came together for a day of music, dance and cheerleading performances. After watching dynamic routines, members of the audience voted for winners that they felt had achieved their “personal best”, which is one of the mottos of the Olympic Games Tokyo 2020.

Almost 1,000 students, in association with Tokyo 2020, co-organised the event. With students engaged in the planning and promotion of the festival, the celebration reflected both sport and Japan’s famous youth culture, providing a glimpse of what the world will get to enjoy as part of the Olympic Games Tokyo 2020.

More than 20,000 Chinese people from nine provinces took part in Olympic Day celebrations. The cities jointly launched a variety of activities that promoted the Olympic spirit, including a road race with nearly 2,000 athletes at the National Olympic Sports Centre. Beijing 2022 also organised “Olympic culture camps”, which allowed participants to practise both summer and winter Olympic sports.