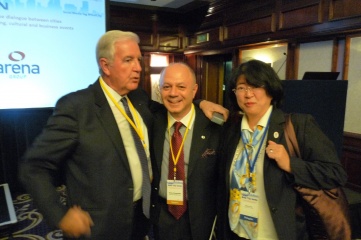 Hosting the Games can make Tokyo become the world’s top city, Governor Yoichi Masuzoe said on a mission to London

Tokyo Governor Yoichi Masuzoe rounded up his visit to London with an audience at the Royal Institute of International Affairs, where he stated his ambition for Tokyo to use its own Olympic legacy to overtake London. He led a delegation that last week took in a tour of the Olympic Park and a reception at Host City Bid to Win conference.

On arriving in London on the evening of 27th October, Masuzoe met with Sir Craig Reedie – keynote speaker at Host City Bid to Win – and sent a senior representative to a Host City reception. All members of the Tokyo delegation received a copy of Host City’s first Japanese edition, which includes an interview with the President Mori of the Tokyo Organising Committee of the Olympic Games.

“This was the first time for us to meet, and we got along very well. Maybe we have a lot in common, except in our hairstyles,” Masuzoe told the Royal Institute of International Affairs.

Masuzoe said that he wants the 2020 Games to be not only the best ever: he wants the Olympic effect to transform Tokyo into a more competitive city than London.

He said a major priority is to use the Games to revive the economy, drawing in people, money, and information from around the world and making the Japanese capital “the number-one city in the world” within six years.

The aim is to make Tokyo a global financial centre to rival the City of London and New York’s Wall Street. “I said to Boris, I will be at London. Sorry about that. That’s the reason for my visit.”

He said he and Boris Johnson had agreed to further strengthen the partnership between London and Tokyo cemented by a possible visit by Boris to Tokyo next year.

He said Tokyo wanted to find out how London managed to sustain its economic development in the aftermath of the 2012 Olympic and Paralympic Games.

Masuzoe said he was impressed to see such a packed programme of events in facilities built for the highly successful Games in 2012. He said it was important for the Tokyo Games to leave an equally palpable legacy.

He said the 2012 Games had changed London significantly and Tokyo would also change after 2020. Abenomics started the process of Japan’s economic recovery, said Masuzoe, a positive shift that quickened further after winning the bid to host the 2020 Games.

However, the language barrier has hampered Tokyo’s growth, with a perception that a small number of foreign nationals live in Japan, he said. This would be rectified by increasing the number of multi-lingual signs and improving accommodation and services for the international community. These shortcomings would be addressed, he said, with the aim of making Tokyo a “people-friendly city”.

The Governor also said Tokyo would follow London’s example in creating a festival of culture as well as sport in 2020.

Emissions would also be reduced, he said. “At the 2020 Games we hope to attract attention to the advent of a hydrogen society by providing visitors with a fleet of vehicles running on hydrogen.

“I understand that here the use of bikes increased after the 2012 Games, the so-called Boris bikes. Tokyo would also create a better environment for bicycle use and promote bicycle sharing.”

Reaching out to world cities

“I plan to build a win-win relationship with cities around the world and thereby strengthen Tokyo’s appeal,” Masuzoe said.

If relations between China and Japan have historically been tense, visitors from Beijing to Tokyo are most welcome in the modern age.

“It is one of the good achievements of my visit to Beijing,” he said. “They buy many things in Ginza department houses and big shops, and they pay much money, and these shops pay much tax to me, and I can use this money to make our Games successful, right?”