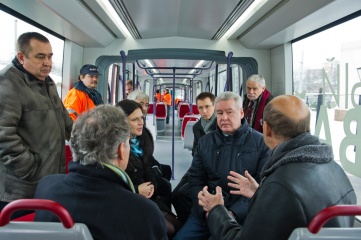 Despite recent hikes in infrastructure spending, Moscow's Mayor says the city could cope with hosting world’s biggest sporting event tomorrow – if it weren't for venues in need of modernisation

Moscow’s urban systems could cope with hosting an event on the scale of the FIFA World Cup “tomorrow”,  Sergei Sobyanin, Mayor of Moscow said on Saturday in an interview with TV channel Moscow 24. He also said that football infrastructure will need to be fully modernised before the city is ready to host.

The Mayor’s comments come just a few days after the revelation from his office, City Hall, that Moscow will spend US$8.1bn on preparing for the 2018 FIFA World Cup. This figure was four times as much as the US$2bn that the city’s top sports official Alexey Vorobyov said earlier in April would be spent on sporting and transport infrastructure.

The largest proportion of City Hall’s revised budget will be allocated to urban infrastructure indirectly associated with the event. Two thirds of the budget will go towards transport upgrades in Moscow, which currently experiences some of the heaviest traffic in the world.

Eleven per cent of the spending will be spent on sports facilities, including the major task of redeveloping Luzhniki Stadium, which is Moscow’s biggest sporting infrastructure project.

"The works are fully under way," said Sobyanin. “At the same time, training fields are being built and football infrastructure will become modern by then."

Sobyanin confirmed that the new Otkrytie, or Spartak stadium will open this year, along with a new Spartak metro station. He also said the number of hotel rooms in Moscow is growing by 1,000 each year.

The successful hosting of the IAAF World Athletics Championships in 2013 is evidence of Moscow’s capacity to host mega events, he said. “In terms of number of teams this is the second most spectacular event after the Olympics."