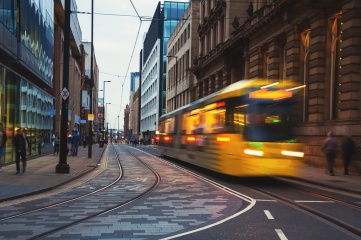 Light rail Metrolink tram in the city center of Manchester

A project in Manchester designed to improve services for citizens has won the “Internet of Things Cities” competition.

The project, led by Greater Manchester Local Enterprise Partnership, was selected out of 22 entries involving 34 cities across the UK and with a shortlist of six finalists.

UK Digital Economy Minister Ed Vaizey said the Manchester project won because of its “ambition, scale, coordination across the public and private sector, and potential for success.

“The Manchester project will help the UK to be a world leader in the adoption of Internet of Things technologies and inspire others around the world to create smarter cities.

“The Project will bring real benefits to people who live and work across Manchester, one of our Northern Powerhouse cities.”

The CityVerve Project includes plans for talkative bus stops, which let bus operators know when commuters are waiting, and a network of sensors in parks and along commuter routes to encourage people to do more physical activity.

IoT adds sensors and data analysis to equipment like streetlamps, vehicles or home heating equipment. These ‘smart’ improvements enable the delivery of more personal, efficient and flexible products and services.

“The pioneering work Manchester is doing on devolution, finding innovative ways to respond to local needs and priorities, makes us the perfect test bed for this work,” Sir Richard Leese, leader of Manchester City Council said on behalf of the CityVerve consortium.

“Our plans are firmly focussed on creating the conditions for economic growth and helping connect people with the opportunities created - whether that’s helping them to monitor their own health to help avoid preventable illness or giving them improving transport information to help them move around the city more easily.”

The CityVerve project will demonstrate applications of IoT technologies and services in four key areas: healthcare; transport; energy and environment; and culture and community. It aims to provide a replicable model for other cities in the UK and beyond.

IoT is a major area of growth that is set to have a transformative effect on society. A recent report by independent consultants Arup estimates that the global value of the IoT sector will exceed £255 billion a year by 2020.

IoT is one of the four components of RAID, which comprises the disruptive technologies of Robotics, Artificial intelligence, Internet of things and big Data.

To harness the potential of these disruptive innovations, city and business leaders are meeting at the large scale RAID Confex in Utrecht on 31st May and 1st June 2016. To find out more visit www.raidconfex.com