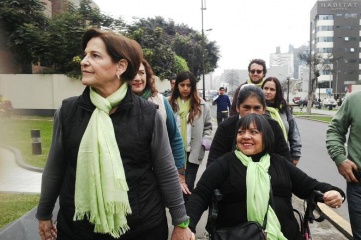 Fast growing cities like Lima, which hosts global climate talks next week and the Pan American Games in 2019, have been identified as key battlegrounds for tackling climate change

Cities are often seen as the problem rather than the solution when it comes to pollution – particularly in the rapidly developing world. But according to the mayor of Lima, which hosts global climate negotiations next week, cities are where global environmental challenges can be best tackled.

“The challenge of supporting economic growth and tackling climate change will be met in the world’s cities,” said Susana Villarán, mayor of Lima, speaking on the publication of five studies by the Global Commission on the Economy and Climate ahead of the Global Climate Change Conference in Lima.

Lima, one of the fastest growing cities in Latin America with more than seven million inhabitants, is the focus on one of these studies. The city faces substantial increases in energy bills and more greenhouse gas emissions unless action is taken.

The research conducted for the Global Commission shows that, through effective investments in transport, Lima can reduce its carbon emissions by 15 per cent by 2025 while saving citizens US$1.1bn per annum in energy bills. These investments could be paid back in less than three years, building on the improvements already implemented in the city.

“Investing in public transport is good for citizens, good for business and good for the climate,” said Villarán. “This study shows that it is in the economic interest of the city and of its people to build better. Clear leadership is now needed to make this vision a reality.”

Lima is just one of many cities that can use transport upgrades to make a massive change to the world’s climate. According to the Global Commission on the Economy and Climate, better, more efficient transport systems could enable the world’s 724 largest cities to reduce greenhouse gas emissions by up to 1.4 billion tonnes of CO2 a year – greater than the annual emissions of Japan.

Lima is hosting the Pan American Games in 2019, an international mega event that can act as a catalyst for the host city to invest in sustainable urban development.

The Global Commission also cited the World Cup host city of Curitiba in Brazil, which has accommodated a threefold increase in population since the 1960s while achieving per capita greenhouse gas emissions 25 per cent lower and gasoline consumption 30 per cent lower than the national average.

“Over the next two decades, cities will grow by over a billion people and generate two thirds of global economic growth,” said Graham Floater of LSE Cities at the London School of Economics and director of the Global Commission’s cities research.

“If this rapid urban growth is managed badly, we face a world of sprawling, inefficient, polluted cities – and a major climate change risk. But a new breed of cities is emerging with compact, connected development – innovative cities that are more productive, attractive and low carbon.”

The Global Commission highlighted Stockholm for its leadership in reducing emissions by 35% from 1993 to 2010 while its economy grew by 41 per cent. In London, car ownership decreased 6 per cent from 1995 to 2011 as while the city’s economy grew by 40 per cent.

"Mayors and policy-makers adopting low-carbon strategies are making their cities more liveable and more attractive to talent and entrepreneurs, said Ani Dasgupta of the World Resources Institute Ross Center for Sustainable Cities. “The economy and the environment of urban cities go hand-in-hand in creating growth."