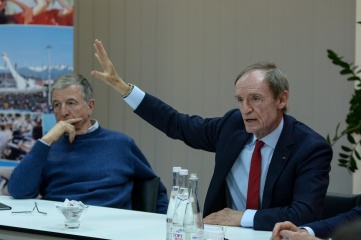 The Russian International Olympic University is one of the key legacy projects of the 2014 Olympic Winter Games.

Masters students at the Russian International Olympic University (RIOU) in Sochi have quizzed three of the key sports administrators behind the Sochi 2014 Olympic Winter Games.

During their meetings with RIOU’s current intake of Master of Sport Administration (MSA) students, the trio talked about various organisational aspects of Sochi 2014, including finances and budgeting, sponsorship, recruitment and leadership.

After meeting with the MSA students, Killy, a triple Olympic champion in Alpine skiing and an IOC Honorary Member, said: “RIOU is a direct legacy of the 2014 Olympic Winter Games. I was delighted to talk to the students and share my experiences with them. We are completing our careers as they are just embarking on theirs. This is how continuity in the Olympic Movement works.

“The students were very keen to have as much information as possible so we gave them a lot of advice because they are young and are at the beginning of their careers.”

RIOU offers its MSA students a unique experience: a one-year immersion in Olympic culture and best-practice, in an Olympic Games host city, with access to expert professors from all over the world, as well as high-profile guests from the Olympic Movement.

Chernyshenko, who is also the president of the Kontinental Hockey League, described how Sochi’s status as a centre of Olympic learning was established during the preparations for Sochi 2014.

He said: “The preparations for the Sochi 2014 Winter Games involved thousands of specialists, who accumulated invaluable experience. Now they are working all over Russia, applying and disseminating their knowledge, and thus helping to raise the quality of standards in different areas of the sports industry.”