Home
»
News
»
Grevemberg: tell us how Games can develop your city 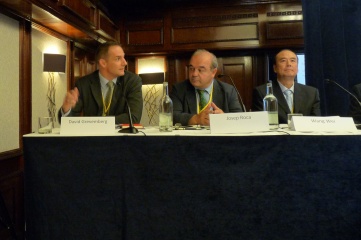 David Grevemberg (left), CEO of the Commonwealth Games Federation and Glasgow 2014, at HOST CITY Bid to Win with city leaders Josep Roca of Barcelona and Wang Wei of Beijing

Just a few weeks into his new role as CEO of the Commonwealth Games Federation, David Grevemberg took time to speak to HOST CITY about priorities ahead, including bids for the 2022 Games

“Like Commonwealth athletes we celebrate our successes and get straight back to the training field pushing every day towards new and ambitious goals. The pace is fast with the focus over the coming months on key milestones for three future Games,” the former wrestler told HOST CITY.

“First up on the starting block in real terms is the Commonwealth Youth Games in Samoa which is in September and is such an important launch pad for the next generation of Commonwealth sporting stars.

“There's the Gold Coast 2018 team focusing on their core planning phase, then there's the bidding process for the 2022 Commonwealth Games which is in full swing.”

The evaluation process for 2022 is being led by Louise Martin. HOST CITY asked Grevemberg to identify the most important contributions that the candidates for 2022, Durban and Edmonton, could bring to the Games.

"One of the most important things they can each bring to the CGF evaluation process – as well, of course, of demonstrating the technical capabilities – is that real sense of where the Commonwealth Games sits within the past, present and future stories of their city, how the Games fits within the aspirations of their citizens and communities and what further opportunities being a Host City could help them unlock.

“We're really fortunate to have in both Durban and Edmonton such incredibly dynamic yet different great Commonwealth cities with their own rich stories, distinct aspirations and goals.”

The official Candidate City bid lodgement for the 2022 Commonwealth Games takes place in March next year with the formal announcement of the Host City of the XXII Commonwealth Games made at the CGF General Assembly in Auckland next September.

“I'm really looking forward to hearing the visions and ambitions that are coming forward," said Grevemberg.

Grevemberg is anticipates the Gold Coast having a particularly big impact on youth around the world. "Through sport we have a great opportunity to play an empowering part in realising the potential of young people.

“With 60 per cent of the Commonwealth's two billion citizens under the age of 30, this is our opportunity to impact positively on the next generation of Commonwealth citizens and leaders and I'm confident that the Gold Coast 2018 Commonwealth Games will deliver a world-class stage on which the elite athletes of the Commonwealth can inspire and engage across nations, territories and communities."

Why bid for the Games?

Taking to the helm of a federation that owns the rights to one of the world’s biggest event properties at a time when some cities are shying away from hosting mega events, Grevemberg is keen to stress the benefits of bidding for the Games.

“Each Commonwealth Games is itself a great opportunity for cities and communities across the Commonwealth to see for themselves the potential that being a Host City can bring.

He cites Glasgow 2014 as an example. “Prospective host cities can look at Glasgow 2014 and see the potential for social impact hosting a Commonwealth Games can bring, as well as the opportunities a Games offers cities and nations to engage positively with the broader Commonwealth and beyond.

“The Commonwealth Games played a core part in delivering on city and national ambitions for jobs and health, showcasing international excellence in complex event delivery as well as creating a world-class celebration of which the people of Glasgow and Scotland could really feel part of and feel incredibly proud.

“In achieving their goals and delivering the Games, the Glasgow 2014 Games Partners also thought carefully and creatively about infrastructural investment, making deliberate decisions to invest in improving permanent sporting facilities that are both world-class and community-relevant.

“The decision, for example, to overlay a temporary athletics field of play in Hampden Park, Scotland's national football stadium instead of building a new athletics stadium demonstrated really well how using smart technological solutions could assist in creating sustainable and cost-effective alternatives to building new venues.

"Glasgow 2014 was a turning point for the Commonwealth sports movement. The Games in Glasgow demonstrated what can be achieved when people are united through passion, partnership and common purpose.”

During his transition from CEO of Glasgow 2014 to the Commonwealth Games Federation, Grevemberg enjoyed the opportunity to speak at HOST CITY Bid to Win conference.

“Sharing the experiences and ambitions of others is always insightful and energising. Sport creates so many powerful opportunities for innovation, collaboration and partnerships and gatherings such as this play a valuable part in sparking ideas and motivating ambition.

“Partnerships will be a core focus for the CGF and our job now is to harness all of that potential and use it to take Commonwealth sport to a new level.”