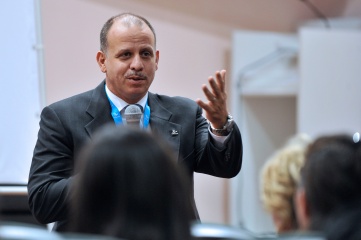 Generations For Peace, a charity that uses sport to promote peace, has been ranked 32nd in the “Top 500 NGOs” list for 2015.

The NGO, founded by IOC member for Jordan Prince Feisal Al Hussein, has climbed 62 places since the last ranking in 2014, making it the second fastest riser on the 2015 list.

NGOs are evaluated on their innovation, impact and sustainability.

“Generations For Peace has walked the walk in a very, very short period of time. We were just so impressed,” said Jean-Christophe Nothias, Editor of the ‘Top 500 NGOs’ list.

“Many NGOs previously ranked have gone down the ladder. Generations For Peace has moved up, from #94 to #32; the second-biggest progress of all.

“This ranking recognises Generations For Peace’s management, relative size, expansion and impact, and the overall philosophy of the very local anchoring approach.”

HRH Prince Feisal Al Hussein, Founder and Chairman of Generations For Peace said “I am extremely proud that the impact of our programmes in Jordan and around the world is receiving such global recognition.

“This outstanding ranking has been achieved through the extraordinary dedication of our Generations For Peace volunteers, inspiring and leading change through their efforts to promote peace, tolerance and respect in their own communities. And their success is shared by all our partners who are supporting us every step of the way.”

Generation For Peace also cited its strong relationships with key partners including the Olympic Movement, United Nations agencies (UNICEF and UNESCO), governmental donors including the Norwegian Ministry of Foreign Affairs, the U.S. Department of State and USAID as well as commercial partners like Samsung as a key factor in achieving this ranking.

Since its launch in 2007, Generations For Peace has trained and mentored more than 8,500 volunteer leaders of youth in 50 countries in the Middle East, Africa, Asia, and Europe, with programmes impacting more than 216,000 children, youth and adults.

“This recognition motivates us all – our staff, our volunteers and our partners – to build on our success and expand our reach to more communities, in response to growing global demand for our programmes.”