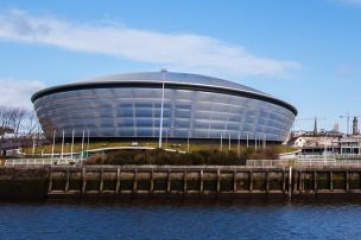 The SSE Hydro is designed to host both sporting and cultural events in Glasgow, a UNESCO City of Music

Many will be looking forward to the Glasgow 2014 Commonwealth Games this summer purely because of the sporting action that will be taking place across Scotland’s largest city, with stars such as Mo Farah set to be competing. However, in recent years major sporting events have not only been required to provide a city full of the best in sporting stadiums and facilities but also a comprehensive cultural programme.

The Cultural Olympiad, which took place as part of the London 2012 Summer Olympics, included artists from across the country taking part in large scale cultural events. The Glasgow 2014 Commonwealth Games is planning a similar array of arts projects to take place around the Games.

Organisers have called the Glasgow 2014 Cultural Programme an ‘unprecedented nationwide programme of activity’ that includes 200 projects and exhibitions and over 800 events. The programme is split into two separate brands: Culture 2014, which is a longer term project that is taking place across Scotland, and Festival 2014, which is the Glasgow-based side of the project that will run alongside side the sporting activities.

Culture 2014 is set to include dance performances, stand-up comedy and theatre projects across Scotland which will aim to involve a large number of people from a wide range of backgrounds. Festival 2014 will then provide two weeks of culture and arts in the host city of Glasgow, which organisers hope will act as a celebration of the Games.

A sporting and cultural event

The head of this ambitious cultural programme is Jill Miller. She says the cultural function of the Commonwealth Games is now a key element of the event that needs to be integrated in with the sporting aspects.

“The organising committee for the Games has been very clear about this, it is a sporting and cultural event,” explains Miller. “I think that’s something that’s changed. What we’re really keen on is that this is about strengthening what’s happening in the city to make the city the very best host is possibly can be.”

Miller experienced the cultural side of the Commonwealth Games in Melbourne, Manchester and Delhi and she says this experience has given her team a great insight into how best to put together a cultural programme.

“We went to look at what was happening in terms of how these festivals were delivered. We came back from all of those experiences and developed a model in Glasgow that was about engaging with our existing cultural sectors, to make sure they had the opportunity to accelerate their ambitions.”

Legacy is often cited as one of the key aspects of any cities’ bid to host a major sports event, but this is usually looked upon from a sporting and infrastructure perspective. In London the regeneration of the East End and the lasting effects of inspirational sporting achievements were cited as key parts of the legacy of the 2012 Olympic Games.

However, Miller wants to also include the legacy element of the Games into the cultural programme. “I would suggest the festival we have in the city is much more integrated into the plans and the developments for the future… what we’re trying to do is get people to come back post 2014,” she says.

Host with the most

To read the rest of this feature, register to receive the next issue of HOST CITY magazine