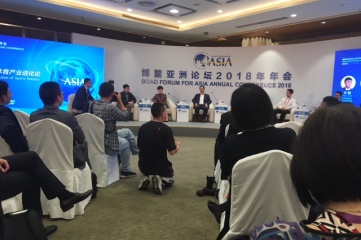 The Boao Forum for Asia takes place annually on the Chinese island of Hainan. This year’s event included a panel discussion on “Potential of the Sports Industry” with VIP speakers including Olympic champions, national sports association leaders, leading Chinese brands and media owners.

The panel opened with reflections on the leadership of the President Xi Jinping, under which sports has played an important part of the drive for healthier living and the development of China's “soft power”.

“Everybody is behind the national plan – it is substantial”, said Qian Jiannong, Senior Vice President, Fosun International.

Opening sports facilities for free to local people is an important aspect of the plan.

“Sport is independent, something special and different,” said Zhang Dazhong, CEO of Alisports, whose project is laying foundations “to empower industries and provide services to national fitness.”

He emphasised Alisports’ commitment to the empowerment process of sports, while also focussing on the enjoyment of sports.

Zeng Gang, Vice President of Suning Sports emphasised the importance of investment into education while also making it fun. “Sports is one part of entertainment… we try to promote enthusiasm and a positive feeling for sport”.

The ability to develop a sport is also linked to the availability of venues and equipment, which is one reason for the rapid growth of snooker in China. “Anyone can play in snooker halls,” pointed out Ju Cunguo, general manager of Daqing city's Cultural Media Co., Ltd.

According to Rupert Hoogewerf, Chairman of the Hurun Report, motor sports, fitness and horse racing are increasing and leading demands in China for sport.

China has its eyes on great success at the 2022 Winter Olympic Games, hosted in Beijing.

"Whilst there is pressure on for Beijing2022, all sportspeople can do is their best for their country," said Li Yan, Chairwoman of the Chinese Skating Association.

Fang Gang said CCTV wants to showcase sport stars who can lead and inspire Chinese people and play sports. “The advantage of CCTV is that it is a national channel working for national good,” he said.

One such star is Wu Dajing, who has been incredibly busy ambassador for winter sports since PyeongChang 2018, where he became the first Chinese man to win Olympic short track gold.

“I could not believe how many people were at the airport on my return. But my coach said it will only last for 40 days!” said Wu.

He said he wants to “make a contribution to Winter Games and promote speed skating and skiing.”

“Three years ago, nobody in South of China knew short track speed skating – they do now!”

Wu Dajing is asking for help from digital platforms to help promote Beijing2022.

While Alibaba is the biggest online retailer in China, the biggest communication platform is WeChat, owned by Tencent.

Tencent is also working with tennis, soccer, and baseball organisations to find out how data can be used in China.

“Tencent owners are very forward looking – there is no need to monetise data today,” he said.  “We are looking for a win-win of Tencent working with people.”

Li Yan, Chairwoman of Chinese Skating Association was interested to find out how digital platforms can help their 60 national events. “Work with us… Do not let the sport get lost in data and size of market,” she asked.

Zhang Dazhong said Alibaba expects a doubling of winter sports sales and higher value per sale for winter sports, but stressed that more investment is needed in winter sports infrastructure.

He also said that football in China needs to fulfil its potential. The Chinese Super League must find a home for football fans and “create a tie from fan to club”.

The Chinese Super League is working with English Premier League to learn how to customise and commercialise football in China, said Zeng.

It’s not just online where sales are growing; Suning has recently opened a sport store in Nanjing as it promotes a “hybrid offline-online model for sport.”

This article was based on a panel discussion at Boao Forum For Asia on 9 April 2018. For more detailed discussion on Sports development in China please attend Host City Asia in Beijing on 31 May 2018