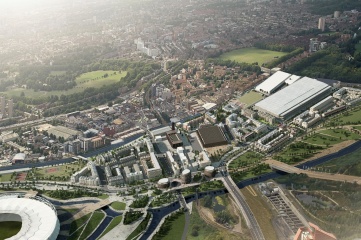 The construction is now scheduled to be completed in 2023 - 6 years ahead of schedule (Photo: London Legacy Delivery Corporation)

In a joint venture with Places for People, Balfour Beatty is to build 1,500 new homes on the former Olympic Park, up to 30 per of which will be “affordable” housing, the mayor of London announced today

A partnership between Balfour Beatty and Places for People has been awarded a contract to create 1,500 new homes on the Queen Elizabeth Olympic Park.

With property prices spiralling in the UK capital, up to 30 of the housing is to be affordable and 500 properties will be for rental.

“This is the most successful and fastest growing city anywhere in Europe, and it is absolutely vital we provide thousands of new houses to allow people to live close to their places of work,” said Boris Johnson, mayor of London.

“I am thrilled to confirm we have now appointed high quality developers to help bring forward plans for these important new neighbourhoods on our iconic Queen Elizabeth Olympic Park, a whopping six years ahead of target.”

The joint venture between Places for People and Balfour Beatty was awarded the contact through a competitive process involving a shortlist of six other candidates.

“We are delighted by the high quality of the bid from Places for People and Balfour Beatty, which offers exciting opportunities for local people, businesses and Queen Elizabeth Olympic Park,” said David Goldstone, chief executive of London Legacy Development Corporation, responsible for redeveloping the park.

Over the next eight years, Balfour Beatty is to invest up to £35 million in the project – 50 per cent of the equity required.

Balfour Beatty is to deliver the entire construction aspect of the property development, which it anticipates will create approximately £400 million of revenue.

“I look forward to continuing our strong partnership with the London Legacy Development Corporation to ensure that commitments made as part of the London 2012 Games are delivered by not only creating new communities but also new jobs, and apprenticeships for young people wanting to join the growing infrastructure sector,” said Leo Quinn, chief executive of Balfour Beatty Group.

“With our partner, Places for People, we are very excited to be able to create these new, vibrant, sustainable communities for East London.”

Two new neighbourhoods are to be created, East Wick and Sweetwater, both at the western side of the park.

The designs include terraced and mews houses, in keeping with London’s residential architecture.

850 new homes and a primary school will be built in East Wick, in the north west of the Park next to Hackney Wick and the digital quarter, Here East.

650 new homes, a primary school and a health centre will be built in Sweetwater, in the south-west of the Park near Old Ford and the Copper Box Arena.

"This is East London's moment and it's our big moment too and we are thrilled to have been selected to be part of the transformation of Queen Elizabeth Olympic Park,” said David Cowans, chief executive of Places for People.

“With our partner, Balfour Beatty, we have the perfect opportunity to work with the London Legacy Development Corporation to create a truly unique and exciting place to live.”

The project is set to be complete by 2023, bringing the new housing to the park six years earlier than scheduled in the original legacy masterplan.