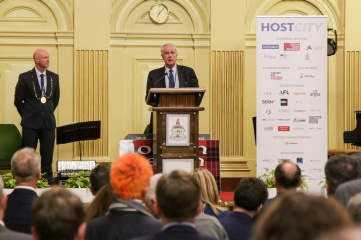 I have the pleasure of welcoming you all to my host city for the third time – and seeing how this event has developed and grown over the years.

The overall theme for this year is "High impact events in the current climate" and there are a number of very qualified people to speak about this today and tomorrow – not least my colleagues from the International Olympic Committee in the first two panels.

The recent change by the IOC to award two summer Olympic Games at the same time to Paris in 2024 and Los Angeles in 2028 certainly covers the phrase "High Impact Events" – and you will hear from two absolute experts in that decision – Patrick Baumann who chaired the IOC Evaluation Commission and Christophe Dubi, the Olympic Games Executive Director. You will also hear from David Grevemberg, who ran the 2014 Commonwealth Games.

I used to know what I thought was a lot about the IOC bidding process, having served on three Evaluation and two Coordination Commissions – and then bidding twice with Manchester and once with London as we tried to convince the IOC of the joys of our case – and thankfully, one of these efforts worked.

I have been increasingly concerned that the IOC bidding process seems to be directed at how the process can be made shorter, cheaper and more accommodating. Perhaps we should also be prepared to speak out rather more about the huge benefits of hosting the Games that can be delivered by a well organised combination of political, organisational and sporting skills.

I am not going to repeat the huge benefits from London 2012 – and echoed in many ways by the Glasgow 2014 Commonwealth Games – where the development of village, infrastructure and sports facilities provide legacy benefits for generations to come. But I was hugely encouraged by a recent report from the Mayor of London in October to the effect that East London – the home of the 2012 Games – is the fastest growing part of London as the "Olympic effect" continues to attract jobs and investment. This report reveals that an extra 110,000 jobs have been created in East London since the Games, more than three times the number forecast in 2012. This boom is expected to continue with an additional 125,000 jobs across the six Olympic Boroughs by 2030.

This can only be described as high impact and I can only hope that any city or National Olympic Committee thinking of entering the Olympic Bidding race might well look at the London experience, as well as making full use of the revised IOC candidature process to fit the Games into their own long-term planning. Glasgow also has a terrific record of bidding for and organising individual World and European Championships – perhaps most recently World Badminton and World Gymnastics, the best presentation of indoor sport I have ever seen.

You will all have the opportunity to study the context of this debate over the next day and a half with panels and discussions on practically every aspect – the size of the city, safety, technology, entertainment and many others. It should be interesting in the extreme and I am sure that Glasgow will be listening and paying full attention. And Glasgow should, because Host City is set to come back to Glasgow in 2018 – and expect even more interest and attendance than this year which is the best attended yet.

Welcome back and enjoy.