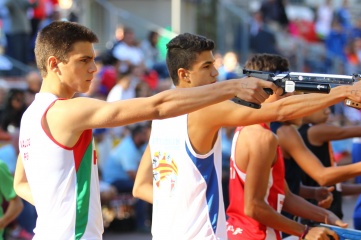 The new discipline, to be added in time for LA28, must not fall under the governance of another IOC-recognised International Federation

[Source: UIPM] The Union Internationale de Pentathlon Moderne (UIPM) has opened a consultation process to identify a suitable replacement for Riding in the Olympic sport of Modern Pentathlon.

The historic move comes after the UIPM Executive Board (EB) unanimously endorsed a series of recommendations made by the UIPM Innovation Commission after a two-day meeting in Monaco last week.

The Innovation Commission was set up in 2018 to continuously monitor the composition of Modern Pentathlon and review its suitability for the Olympic Games in the context of Olympic Agenda 2020 and Olympic Agenda 2020+5 – the strategic roadmap of the International Olympic Committee (IOC).

The EB met virtually on October 31 and endorsed the Innovation Commission’s recommendation that Riding be replaced with another discipline that enhances the popularity and credibility of Modern Pentathlon, while preserving its status as the ultimate physical and mental sporting challenge – as envisaged by Baron Pierre de Coubertin, the founder of the Modern Olympic Games.

The EB decision has today (November 4) been communicated to UIPM’s global community of National Federations and members of the UIPM Athletes, Coaches and Technical Committees during a series of conference calls.

All changes resulting from the consultation process will be implemented in time for the Los Angeles 2028 Olympic Summer Games – only coming into force after Paris 2024, which will be the first Games to feature Modern Pentathlon’s new TV-friendly elimination format, which enables audiences to watch all five disciplines in 90 minutes within a Pentathlon Stadium.

The consultation process will be inclusive of specific stakeholder groups, namely athletes and coaches as well as media and marketing partners, and the selection of a new discipline will be based on the following criteria. It must:

UIPM President Dr Klaus Schormann said: “The recommendations put forward by the UIPM Innovation Commission are in continuity with the tradition of innovation which UIPM has in its DNA.”

“Many times in recent decades our sport has evolved to meet the changing expectations of the modern world. This evolution has created more appeal for young athletes and families, more value for spectators and TV / digital audiences, a reduced environmental impact and 100% gender equality since the Sydney 2000 Olympic Summer Games.”

“We can be rightly proud of what our global family has achieved, and now the time has come to be bold and ambitious once again in following the strong recommendations of our UIPM Innovation Commission.”

“On behalf of the UIPM Executive Board I ask our global community to embrace change and grasp the momentous opportunity before us. A new discipline will provide fresh impetus to our sport and strengthen the position of Modern Pentathlon within the Olympic movement.”

“The Modern Pentathlon will remain a five-discipline sport and will continue to provide the ultimate moral and physical examination of an athlete, as Coubertin envisaged.”

“In all of our communications with various stakeholders, we have all agreed that we need to keep our sport at the highest possible level, designed to test the physical and mental qualities of the complete athlete.”

“We now look forward to an inclusive and very positive consultation process as we consider which sporting discipline is the most suitable to take Modern Pentathlon into a new era, alongside Swimming, Fencing and Laser Run (laser shooting and running).”

“We really need to make sure that in that new environment, with all of these new sports that have demonstrated strength and a lot of traction with people and media, we have to make sure that our sport if flawless.”

The equestrian discipline of show jumping has been ever-present in Modern Pentathlon since the multi-sport was created by Coubertin, the pioneer of the Modern Olympic Games, and introduced to the world at Stockholm 1912.

Swimming, Fencing, Running and Shooting have also been retained throughout the past 11 decades, although the last two disciplines were merged to create the Laser Run combination that now provides a thrilling climax to every Modern Pentathlon and Tetrathlon.

The creation of Laser Run has been one of many changes marking the evolution of Modern Pentathlon as a safe and sustainable sport with a captivating, fast-paced format suited to 21st-century audiences.

The timeline for the selection process of the new discipline as well as the transition steps will be communicated in the forthcoming weeks.