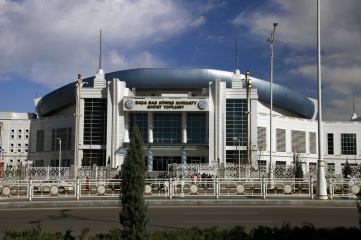 5 th Asian Indoor Games and martial arts, which will be held in Ashgabat (Turkmenistan) in 2017, from September 15 to 24 (Photo: Velirina / Shutterstock)

With just under 30 days to go until the start of the 5th Asian Indoor and Martial Arts Games in Ashgabat, the Trivandi Chanzo team on site has surpassed the 700-mark.

More than 300 Games-experienced international staff from over 20 countries have been recruited and mobilised to Ashgabat during the last year.

These international experts have also recruited and trained over 400 national staff through the Ashgabat 2017 Games Academy to ensure a lasting human legacy of event professionals for Turkmenistan.

Trivandi Chanzo Limited (TCL) were appointed as the official ‘Operator for Games Planning and Delivery’ in June 2016 and the combined international and national TCL team represents the largest ever outsourced solution for major event planning and operations.

The 5th Asian Indoor and Martial Arts Games will be hosted in the city of Ashgabat, Turkmenistan in September and will see more than 6,000 athletes and officials from 65 delegations in Asia and Oceania participate in 351 medal events across 21 sports in 15 venues.

Jean Tomlin, CEO of Chanzo said ‘Ashgabat 2017 is showcasing the capability of people to ‘deliver brilliant’ when faced with an unprecedented challenge and at the same time leave a significant human legacy for future events in Turkmenistan’.

James Bulley, CEO of Trivandi said ‘As we complete our final preparations for the Games I am delighted that we have been able to assemble a team of such talented international and national staff to deliver the extraordinary task of planning and delivering a major multi-sport event in less than 500 days.’

Mr Dayanch Gulgeldiyev, Chairman of the 5th AIMAG Executive Committee said, ‘We are very proud of the team of international and national staff that have been working together to plan and deliver our Games to the highest international standards and showcase the capabilities of Ashgabat and Turkmenistan as a host for major sporting events now and in the future.’

Ashgabat 2017 5th Asian Indoor and Martial Arts Games will take place in Turkmenistan from 17 to 27 September 2017. The Games will feature 21 sports across 15 venues. Ashgabat 2017 is the first Olympic Council of Asia (OCA) Games to be held in a Central Asian country.

Trivandi Chanzo is a joint venture founded by two former members of the London 2012 Organising Committee.