Toronto on a high tech mission for 2015 - Host City News 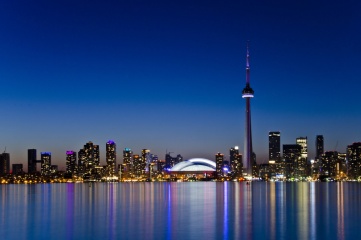 The Rogers Centre, formerly known as SkyDome, will host the opening and closing ceremonies of the 2015 Pan American Games

A Games this big, held in Canada’s most populous city, needs a huge yet reliable level of infrastructure. US$641 million has been set aside for building and renovating infrastructure in the city. That’s where Allen Vansen, the executive vice-president of operations, sport and venue management, comes in.

Vansen was the former vice-president of Triathlon Canada as well as being the vice-president of Workforce Operations and Integration at the Vancouver 2010 Games before coming to work on the Toronto 2015 organising committee.

His experiences in Vancouver were vital in providing a benchmark for the level of service required at the Pan-American Games, he says. “Working on the Pan-American Games has given us a license to be as innovative as we can be and I think that’s one of the things we’ve really taken to heart as we’ve looked at London and some elements of Sochi in terms of things we can do a little bit differently.”

The organising committee selected two vastly experienced organisations as technology partners in order to achieve this innovation. IT services corporation Atos and networking equipment giant Cisco were chosen as two of the ‘Premier Partners’ of the Games. Atos are the official Games systems integration partner and official provider of timing, scoring and results – crucial Games infrastructure, according to Vansen.

“When you get down to it, nothing’s more important in a Games than the sport and competition and of course timing, scoring and the publishing of those results in critically important. We know with Atos we have a fantastic provider who has tons of Games experience to bring to the table to ensure we deliver those core critical systems.”

Meanwhile, Cisco will be providing the event with wireless network security, unified computing, cloud services, customised Cisco operated stadium Wi-Fi and stadium vision solutions. “With Cisco one of the things we’re pretty excited about is the video and telepresence opportunities that happen for our media at our main press centre,” says Vansen.

But with innovations in technology, communications and networking comes heightened security risks.

To read the rest of the article, register to receive the next issue of HOST CITY magazine