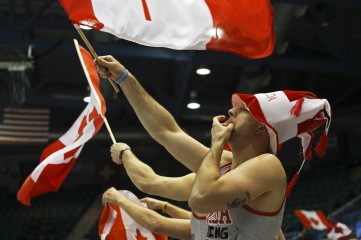 275,000 tickets for the Pan American Games have already been sold, with the Opening Ceremony, football and rugby sevens among the fastest sellers

Toronto’s sports venues are set to be packed out in July, with many of the highest profile events of the Pan American Games selling out fast.

Tickets for the Opening Ceremony have already sold out while the men’s football (soccer) gold medal game is experiencing some of the highest demand.

Other events for which tickets are keenly sought after include the medal rounds for aquatics, track cycling, BMX, canoe/kayak slalom, beach volleyball and equestrian jumping, where few tickets remain available.

Organisers also expect the men’s baseball and basketball gold medal matches to be packed out, with just a few tickets left on sale.

275,000 tickets to the Pan Am Games have already been sold to sports fans paying upwards of US$16 per ticket.

“The numbers are beyond our expectations — especially since we haven’t yet announced when Team Canada will be playing, not to mention the countless athletes from across the Americas who are still in the process of qualifying for the Games.

“That said, it was no surprise that the available tickets to our Opening Ceremony, produced by Cirque de Soleil, went fast. It’s sure to be an unforgettable night.”

Other popular events include the athletics track and field 100m finals and 4x100m finals, the rugby sevens finals, the beach and indoor volleyball finals and the closing ceremony, with entertainment provided by Live Nation.

“The Games are a once-in-a-generation chance to see our most elite summer Games athletes compete on home soil and to be part of the high-energy crowd who will be cheering them on and singing our anthem together,” said Rafi.

The sales campaign for the Toronto 2015 Parapan Am Games starts in spring 2015. From 7-15, August, some of the world’s best para-athletes will be competing for their chance to go to the Rio 2016 Paralympic Games.