The thrill of the Laser-Run - Host City News

Home
»
News
»
The thrill of the Laser-Run 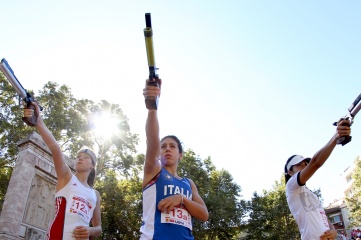 Take Modern Pentathlon and remove the dynamism of Swimming, the dexterity of Fencing and the heroism of Horse Riding. What do you have left?

What you have left is a sport with two disciplines, Running and Laser Shooting, and too big an audience to be counted.

A sport that can take place on a beach, in a park or in a city centre.

A sport where Olympians, beginners and veterans can test themselves on the same terrain, in the same conditions, with the same equipment and with the same sense of enjoyment through competition.

A sport whose compact format creates the possibility for organizing cities to enjoy extensive outreach and exposure, aligning sport with culture and entertainment.

What you have left is Laser-Run.

This sport, this new offspring of the core Olympic sport of Modern Pentathlon, was conceived in 2014 and born in 2015, when the 1st UIPM Laser-Run World Championships were held in the south of France.

There, in downtown Perpignan, the sun shone through the fountains to create a kaleidoscope effect in harmony with the diversity of the competitors: women, men, girls, boys, competing individually and in concert, all ages, nationalities and races.

Twelve months later, in the capital of Portugal, another armada of athletes - 421 from 22 countries - gathered once more to transmit the message that this is a sport for everyone, and that rule applies to spectators as well as athletes.

So why does this format work so well?

By common consent, for spectators the most gripping stage of a Modern Pentathlon competition is the Combined Event. The Run/Shoot. The climax.

Laser-Run is the Combined Event with the slate wiped clean. It is Modern Pentathlon stripped of the complications of water, epees and horses. Laser-Run is not about elegant posture on horseback or razor-like reflexes or continuity of stroke, it is back-to-basics sport and it pulls off the trick of generating a thrilling spectacle with a simple format.

Everyone starts at the same time and the winner is he or she who finishes first. The laws of combat are straightforward. Run smartly, conserve energy, pick up your pistol and don’t miss. Don’t get stuck on the range, or you will be left behind and there will be no second wind. No tired legs to hunt down.

It is a concept that marries the most attractive aspects of running and gaming. Laser-Run combines outdoor athleticism and electronic fun to offer the best of both worlds.

What more could an active young audience wish for?

Well, they might also wish to be able to try out their Laser-Run skills against their friends, and ultimately chase national and international titles, and they might wish to do this in front of their families and other spectators and receive the acclaim on the finish line that they see elite athletes enjoy on TV.

Dr Klaus Schormann, President of UIPM, says: “As we saw during the inauguration of this competition in Perpignan in 2015, and again in Lisbon in 2016, the combination of Running and Shooting which replicates the climax of a Modern Pentathlon competition creates its own exciting World Championships.

“The Laser-Run World Championships has been another big step for the development of Modern Pentathlon and UIPM Sports.”